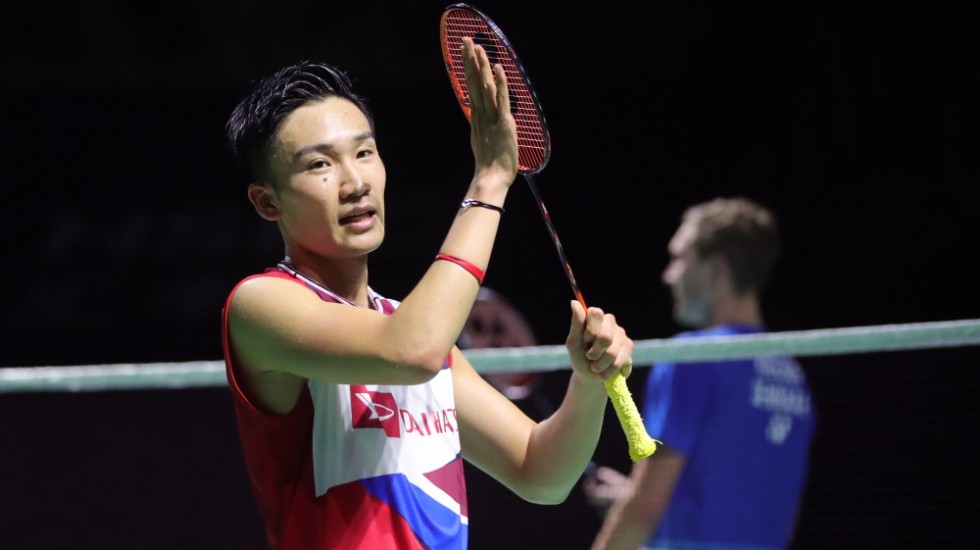 The season finale is set to begin, and most of the attention in men’s singles is likely to be focussed on Kento Momota.

The world No.1 swept nearly everything in his wake, and will head in to the HSBC BWF World Tour Finals 2019 as the runaway favourite.

There are few titles left for Momota to conquer. The season finale is not one of those, for he has won this event previously – in its avatar as the Dubai World Superseries Finals in 2015. Yet, the HSBC BWF World Tour Finals does hold a special challenge for him, for it was at this event last year, at the end of a season which he dominated, that he was ruthlessly cut down by Shi Yu Qi.

In an extraordinary display, Shi blitzed Momota 21-12 21-11 in the final, handing him his worst defeat all year. It is an anomaly he will look to redeem, even though Shi himself has not qualified to the Finals.

“I really want to win this year. I want to be the champion and I’ll do my best,” said Momota.

“Last year I was lucky to be drawn in an easy group and that helped me reach the final. I’m not sure what is going to happen this year, but I’m looking forward to it. The HSBC BWF World Tour Finals has a different feel from other tournaments.”

While it was Momota’s year without a doubt, there were other players who shone from time to time. Chou Tien Chen picked up the only Super 1000 that didn’t go Momota’s way, when he prevailed in a marathon final over Anders Antonsen at the Indonesia Open.

Two weeks later, he was on top of the podium at the Thailand Open, after yet another thrilling final.

Chou acknowledged the peculiar challenges of playing the year-end tournament:

“It’s the end of the season so we’ll all be quite tired. Only the elite eight can participate in the season-ending championships. Every opponent will be strong and I’ll have to be fully focused. Regardless of the outcome, I’ll have upcoming group matches. This is something that I have to be mentally prepared for.”

Talking about his victory in Indonesia, Chou recalled that the key was his mental approach.

“I didn’t expect to reach the final let alone win the title. I had the right mentality then, I was unaffected by whether I was winning or losing. It wasn’t about boosting my confidence from winning the title. I was just glad that I had the right mentality and could adapt to any circumstances. This was something I needed to mature in my game, so the win definitely helped me a lot.”

If he gets into his groove, the Chinese Taipei star has the weapons to go all the way.

There are two Danes among the qualifiers – Viktor Axelsen and Anders Antonsen. Axelsen had a season affected by allergies and a back injury that kept him out of several big tournaments including the World Championships, but he did make a promising return with semifinals in Denmark and France.

Antonsen had his breakthrough year, winning the Indonesia Masters and making the final of the World Championships. The big-match player will sense his chance in Guangzhou.

Both Indonesians – Jonatan Christie and Anthony Ginting – had a fairly encouraging season. Ginting was in four finals but without a title, while Christie picked up titles in Australia and New Zealand before falling short in finals in Japan and France.

Meanwhile, Chen Long, twice winner of the season-ending tournament (2012 and 2014), will count on his experience and his recent form – he won the French Open and was runner-up in Denmark the previous week – to pose questions of his younger rivals.

Of the eight qualifiers, the underdog will be Wang Tzu Wei. Interestingly, he won his first World Tour title at his last event – the Syed Modi Championships – and will hope to spring a surprise or two against the bigger names.