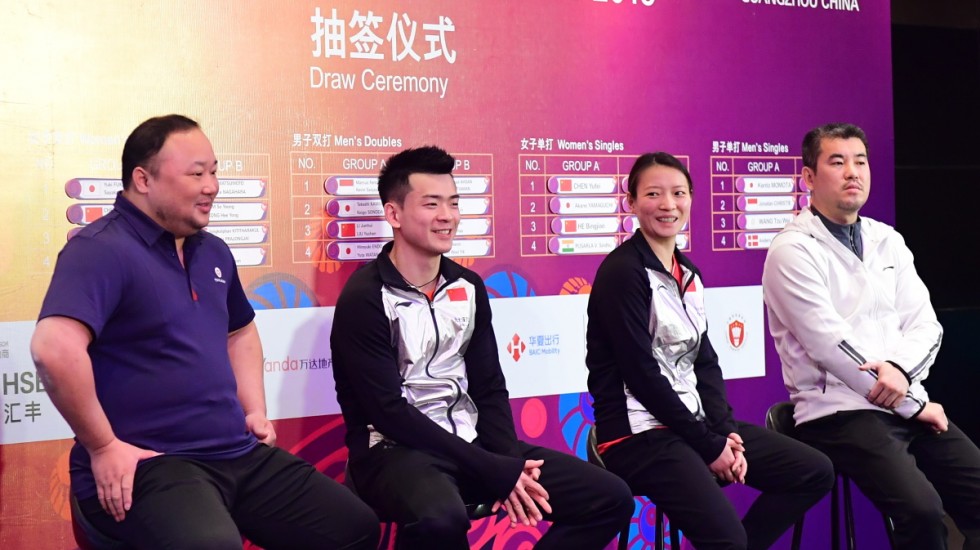 Zheng Si Wei and Huang Ya Qiong, in the quest for the only major title that has eluded them as a pair, start their campaign in a tricky group at the HSBC BWF World Tour Finals 2019.

The world No.1 duo have won the World Championships and all three Super 1000 titles; they are now in the running for a calendar ‘Super Grand Slam’ if they add the HSBC BWF World Tour Finals trophy to their collection. However, they will have to reckon with three pairs in Group B, all of whom have beaten them at least once – Indonesia’s Praveen Jordan/Melati Daeva Oktavianti, Hafiz Faizal/Gloria Emanuelle Widjaja, and Yuta Watanabe/Arisa Higashino.

The draw for the five categories was conducted today in the presence of media, top officials of Chinese Badminton Association and host organisers, and sponsors. Among those who helped pick the draw were BWF President Poul-Erik Høyer; David Liao, President & CEO of HSBC China; and Yang Wei, Olympic gold medallist.

“We are satisfied with the draw since the two Chinese pairs are in different groups,” said Zheng, who added that the other three teams in Group B were all potentially dangerous challengers.

“We have lost to the three pairs, and they are all playing well – particularly the Japanese pair (Watanabe/Higashino), who have been in form recently. We will treat each match like a final. We’re confident of winning the title, but during the match we won’t think too much about it.”

In men’s singles, two-time world champion Kento Momota, who fell at the final hurdle last year, will have to contend with Jonatan Christie, Wang Tzu Wei and Anders Antonsen in Group A.

Group B might well be the ‘group of death’, for it has four evenly-matched contestants in Chou Tien Chen, Chen Long, Viktor Axelsen and Anthony Ginting.