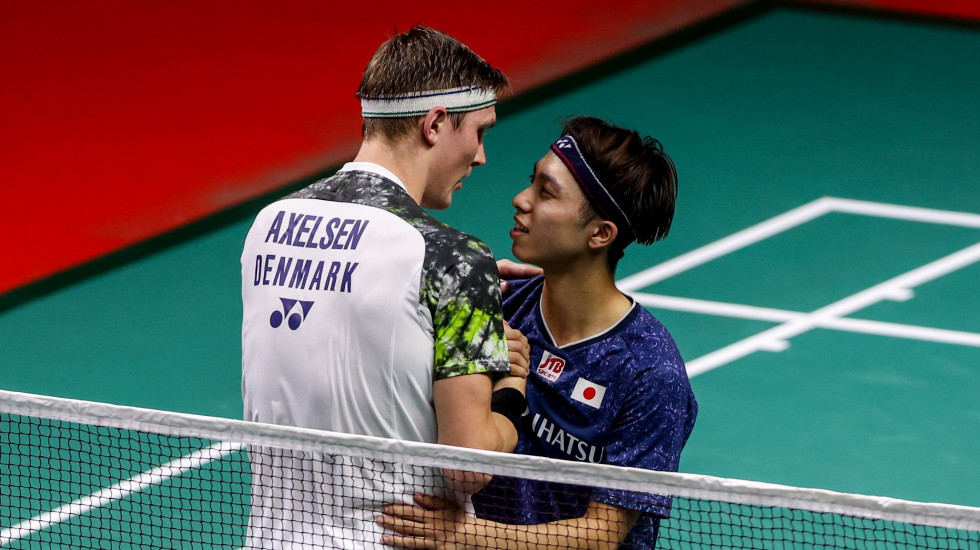 Take a Bow Viktor and Kodai

We now know the formula to test Viktor Axelsen. Speed. That has been apparent here in Bangkok this week with first Prannoy H. S. and tonight Kodai Naraoka proving that the Olympic and world champion is in fact human.

Fast shuttle conditions and a menacing draft at the HSBC BWF World Tour Finals 2022 have meant speed players have been better suited allowing them to get on the front foot and attack.

Noticeably, Prannoy and Naraoka reduced the frequency of lifts against Axelsen these past two days, pushing at the front court, keeping it low, and causing the Dane to defend more than he would on a typically slower court.

It certainly has made the men’s singles division more interesting this week with many fans and pundits previously reconciled to the fact that Axelsen simply had to show up to win, such has been his dominance in 2022.

Yet in the clash of the BWF Player of the Year 2022 versus the Eddy Choong Most Promising Player of the Year, Naraoka not only gave us a glimpse of what lay on the horizon but demonstrated through some sheer brilliance the type of arsenal needed by men’s singles combatants to challenge the great Dane.

If you thought Prannoy’s exploits on Friday were a one off, think again. You can expect more and more players, given the right conditions, to apply this blueprint against the world No.1 83-minutes of pure badminton joy is ample evidence of what we can look forward to.

Much to Axelsen’s credit, his ability to dig himself out of a hole, adjust to the barrage dealt his way, and steel himself for the fight was equally enjoyable to watch. A champion is always a champion, and for the top seed to be tested in such a way can only be a good thing for him, and also the sport.

“I dodged a bullet today. Kodai could have gone through,” Axelsen said afterwards.

“I would say that match was close to being my toughest of the entire year. This had everything – good play, bad play and a lot of mental game, too. It had everything sport has to offer, and I was happy to be a part of it. I respect Kodai a lot and he has a very bright up-and-coming future. Today was a fun game.

“I was lucky but I also stepped up in crucial parts and you have to win on days when everything doesn’t come together. I’m just happy to win today. My family is here and to do well in front of them means a lot to me.”

As for Naraoka, a wise head would advise him to cherish this moment, take the positives, learn from the negatives, and store it in his back pocket. For the next time he takes on the big man, he will need it.

“The match with Viktor was difficult but I managed to do well in the first game. I’m tired, but I used all my strength and power to move as quickly as I could to win the opening game. Viktor’s smash is strong and sharp, so I tried to play as low as I could.

“I felt very excited after the first game and when I was leading in the second. I didn’t know if I should try and take it slow or try to finish it. If I had won the second game, that would have been the biggest result for me.

“I have done well today, and up to this point, I want to continue to get better. I want to win, that’s my goal,” said Naraoka.