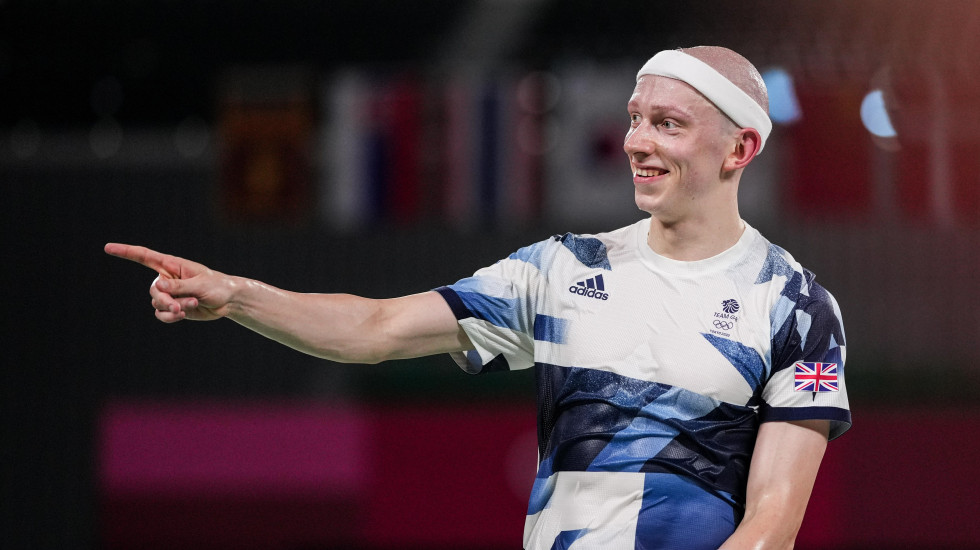 Toby Penty vividly recalls a match from the Sudirman Cup 2019. The alopecia universalis – the hair loss condition that he has since become identified with — had set in, and the world No.59 remembers his face coming up on the big screen.

“I remember lining up to go on, and I saw my face on the green screen and on the big screen in front of all the Chinese fans. And I was just — that moment really hit me. I almost had like a panic attack before I went on court. I remember playing that match. And it’s like an absolute blur.”

That Penty continued to play at a high level on the circuit despite the psychological toll of the condition says much about his character.

Having called time on his career recently, Penty talks about his decision to retire, dealing with alopecia, and his plans for the future.

Part 1 of a two-part interview:

Players these days are extending their careers into their mid or late thirties. So what prompted you to announce your retirement at the age of 30?

I’ve played since I was 19, and I’ve gotten to an age where I just wanted to live a different lifestyle. Badminton had always been the biggest priority to me and I was all in on it, really. It got to the point with some of the challenges the last few years — COVID, injuries, my alopecia – they’ve become quite challenging. I realised that I didn’t feel like I was getting out what I was putting in anymore. I was getting these niggling thoughts the last two years or so. But at the same time I knew there was an Olympics on the horizon, Commonwealth Games at home, and I wanted to perform on those big stages, because I hadn’t had the chance to in the past, to that extent. So that gave me the motivation to keep playing for these last few years, but then I just feel on the main World Tour, week by week, I just didn’t have that burning passion to be as competitive as I once was.

How difficult was it, from contemplating retirement to actually going through with it?

It wasn’t too bad for me. I’d made my mind up at the end of last year. And I felt like the weight of the world had come off my shoulders a little bit. When you get that sort of feeling, it’s probably right. At the same time, I felt like I had the opportunity to finish my career on my terms. So I feel quite lucky in that respect. I knew I wanted to finish in a good way, still playing near the top of the game, and at a good level. So that gave me one last challenge for the last 10 months since the Olympics. Looking back at the Commonwealth Games, and even the World Championships, I still felt like I was playing a really good level. So I was satisfied to leave knowing I got to where I wanted to get to in this last year or two.

How have the first few days after retirement been?

I’ve been coaching a lot more in my local area in Wimbledon. So even a few days after stopping I was right back into doing that and I really enjoyed working with the younger players we have here and I definitely see it as a career path but I also wanted to get away from the elite level for a little bit of time and have a little bit more space for myself. I’m still playing club matches abroad — I played on Saturday in France – I still love the sport, but I just didn’t enjoy traveling as much and the intensity of how much I was having to train.

Apart from a possible coaching career, is there anything you’re seriously considering?

I want to study because I didn’t really get chance to. My way of doing things was very much badminton and 100 per cent commitment to that. Now I have a little bit more time. Especially through what I experienced, like my alopecia, it made me understand the mental side of life and badminton and the psychological aspects. If I can help people the way some people have been able to help me, that would be fantastic. So I’d like to understand and learn more about that, and see if I keep with that in the sports industry or something I take somewhere else. But that’s a longer term project. I want to see where this coaching path takes me. I want to give myself a little bit time and just enjoy living with a bit of the intensity off from the elite side of playing.

You mentioned the alopecia. Your image is now so closely associated with it. Are you comfortable with that, or would you rather be known for your badminton?

It’s one and the same to me. I feel I’ll always be known for what I achieved, getting to the Olympics and stuff like that, and that’s cool, but I also want to be someone who could show that even if you went through something like that, you could still perform on the big stage it doesn’t stop what you’re able to do, and feeling comfortable with yourself. For me, it’s important because, even from the messages I’ve had from people who have the condition, you realise that it affects a lot of people and it’s tough for a lot of people and if I did in any way show just a few people that it’s possible to still live a good life and a happy life and live out your dreams and stuff like that, then I think that’s really good. Hopefully, I can still do that in a slightly smaller way moving forward as well. I know first hand how challenging that experience was for me. It’s still something you battle with every now and then in your head a little bit. So it’s not something I’m ashamed of being known for. I’ve had a good badminton career, so the next challenge is that I want to be known for something else, whether that be coaching or for whatever other industry I find myself in.