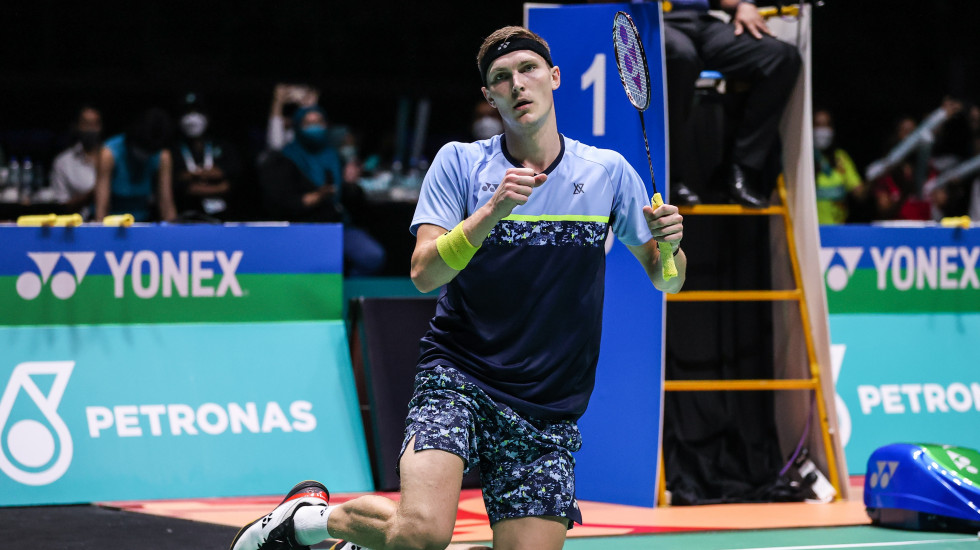 The fairytale return to Malaysia for Kento Momota, complete with the title conquest, was not to be. Momota, whose last visit here saw him win the Malaysia Masters over Viktor Axelsen before a car accident changed everything for him, succumbed to the big-hitting Dane in just 38 minutes.

And with the 21-4 21-7 result today in the PETRONAS Malaysia Open 2022 final, Axelsen added to his own growing legend. This was his 31st match win on the trot, his fifth title of the season, and his 15th HSBC BWF World Tour title to add to his four Superseries crowns.

Momota was the emotional favourite of the crowd going into the match, and the support lasted even late into the match when it was evident that he wouldn’t escape Axelsen’s vice-like grip. From the start Axelsen had a ruthless efficiency about him; and with his defence well organised and his monstrous smashes unfailingly finding the lines, his opponent needed something dramatic to turn things around.

The Japanese had his moments in the second game, with a few rallies right out of his halcyon days, but the spell didn’t last. Axelsen’s accuracy and power continued to punch holes in his court. It was a masterful performance under difficult conditions, and the Dane was quick to point that out.

“I felt like I controlled the drift and my smashes were very accurate and I felt very comfortable, and maybe Kento wasn’t as comfortable today,” said Axelsen. “In a stadium like this you just gain confidence while your opponent is struggling to find the length, and then you just grow with the confidence and that was the case for me today.

“After my win against him in the Denmark Open final, I knew what I had to do and I came in here and tried to play as fast as I could. That worked really well.”

“I’m really surprised about my level today, how I managed to come there much fresher than I had feared. I’ve played many matches over the last four weeks, so to be honest I’m super tired, but I somehow managed to find the explosiveness and energy for my game today.”

Momota, who previously had an imperious record over Axelsen, did have words of admiration for the winner: “He was too good today. I tried to catch up little by little, but he was too strong. He has improved; his speed and quality of shots has gone up on every level. Coming into the final I wasn’t tense at all, so that was a big step forward, and something to take away.”

Ratchanok Intanon shrugged off an underwhelming 2-15 record against Olympic champion Chen Yu Fei as she claimed her first Super 750 title, her last of the same level being the Denmark Open 2017 during the Superseries era. There was a phase in the third when Chen nearly caught up with Intanon after conceding a lead, and Intanon admitted she was reminded of the Indonesia Masters final recently that she lost.

“I kept thinking of the Indonesia final, but I tried to bring myself back and fight for the point and keep running. I will get more confidence from this win and push on during training. I still believe in myself. I’m in good shape right now, and I feel I can keep my mental state strong,” said the Thai.