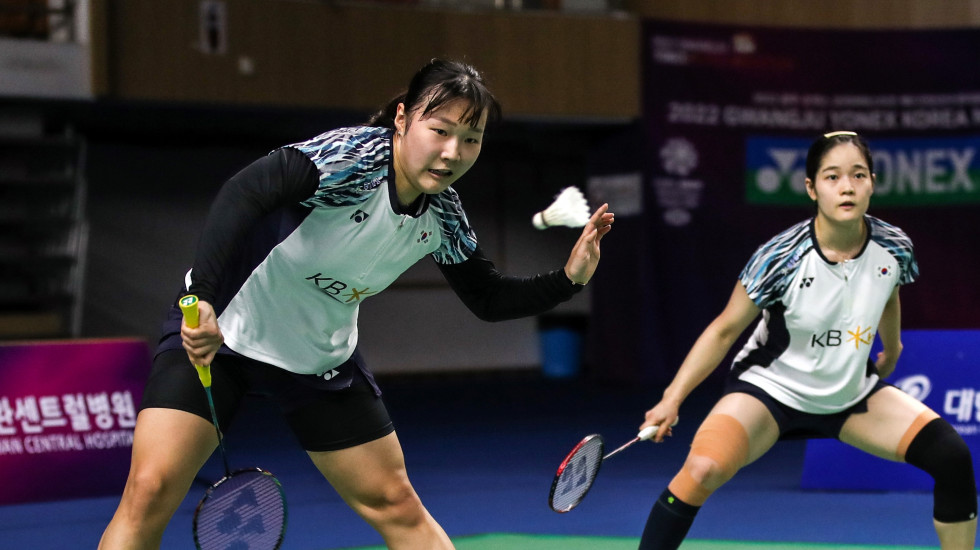 Baek Ha Na and Lee Yu Rim, still early in their second stint together, won a marathon battle against Du Yue and Li Wen Mei to enter the final of the 2022 Gwangju YONEX Korea Masters today.

Ranked No.17 in 2018 before the pair split, only to rejoin late last year, the young Korean pair showed sterling qualities to get the better of the Chinese, 21-18 19-21 21-16. While there were several rallies that went over 50 shots, the piece de resistance was a 195-shot rally early in the third game that the Koreans won.

They managed a narrow lead after the mid-game interval, defending for long periods, and eventually frustrating the big-hitting Li Wen Mei into making errors. The tall Chinese slipped up towards the end of the match, and a couple of her errors allowed the Koreans to clinch the finals spot on their second match point.

It will be an all-Korean battle in the women’s doubles final, with senior compatriots Kim Soyeong/Kong Heeyong having beaten another Korean pair, Eom Hye Won/Kim Bo Ryeong, in the other semifinal in straight games.

The big surprise of the day was Korea Open champion An Seyoung’s tame defeat to fourth seed He Bing Jiao in the women’s singles semifinals. Wearing thick strapping on her right calf, An Seyoung looked a shade under par, with her movement not as fluid as usual, and He Bing Jiao seized the opportunity to close it out 21-11 21-13. The final will be an all-Chinese affair as He Bing Jiao faces familiar opponent Chen Yu Fei, the Olympic champion fighting past the stubborn resistance of teammate Wang Zhi Yi, 21-7 19-21 21-17.

Despite An Seyoung’s loss, the hosts wouldn’t have been displeased with the day’s proceedings. Jeon Hyeok Jin made the men’s singles final beating Thailand’s Sitthikom Thammasin, while in men’s doubles, the veteran pair of Kim Gi Jung/Kim Sa Rang held off Japan’s Hiroki Okamura/Masayuki Onodera in a closely-contested battle, 22-20 12-21 21-19 in a match that went a shade over 70 minutes.

Jeon’s opponent in the final will be world No.47 Kodai Naraoka, the Japanese taking his place in his career’s biggest final by beating Malaysian Soong Joo Ven 21-7 21-23 21-11.

Ou Xuan Yi continued to impress in both his men’s and mixed doubles disciplines. Having made both finals at the GAINWARD German Open, Ou repeated that feat, combining with Liu Yu Chen and Huang Ya Qiong to take out Korean opponents Choi Sol Gyu/Kim Wonho in the men’s and Goh Soon Huat/Lai Shevon Jemie in the mixed.