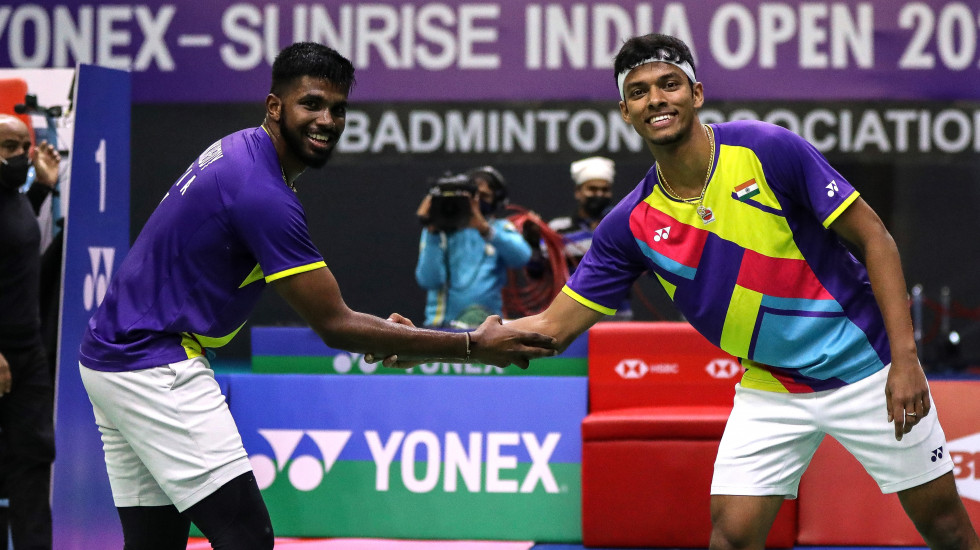 It might not have had the strongest of draws but for Satwiksairaj Rankireddy, the YONEX-SUNRISE India Open 2022 win counted above all his previous accomplishments. After saving five game points in the final against Mohammad Ahsan and Hendra Setiawan, the Indian duo exploded in delight.

“For me it’s a special tournament,” said Rankireddy, struggling to express the enormity of what he felt. “More than the Thailand Open (2019) and the Commonwealth Games (team gold) — I didn’t feel that much excitement on court like this. We’ve won other tournaments, but today was so important. In Indonesia we’ve seen the Minions win almost every tournament in Indonesia, so we wondered why we couldn’t win the India Open. It was there in my bucket list, I really wanted to win this in my career. I’d prepared my mind like that. I told myself to keep calm, that we would get our chances.”

For his partner Chirag Shetty, their tactical outmanoeuvring of Mohammad Ahsan and Hendra Setiawan was evidence that they had finally broken through to an even higher level.

The Indians’ big weapon is Rankireddy’s smash; yet, as he was nursing an earlier shoulder injury, they had to modify their game, with Shetty taking more responsibilities in the attack. On the eve of the final against Ahsan and Setiawan they were clear on what they had to do – deny the Daddies the pace which they work off; not hesitate at lifting the shuttle, and backing their own defence.

“One thing that worked well was that we usually play a game similar to theirs, which is we don’t lift the shuttle that often, but today, instead of playing the shuttle in between when we were low, we lifted the shuttle and were ready for the defence, which worked extremely well for us,” said Shetty. “The last time we played them in Thailand, we gave away easy points, it was kind of 50-50 from the start. But today we had a handsome lead from the beginning. We were making them win each point.”

It helped that Setiawan was uncharacteristically off-colour at the net, a domain he usually dominates. Despite the Daddies having five game points, they couldn’t convert, partly due to their own errors but also due to the Indians staying firm under pressure.

“If we play like this we’re up there. We’ve always been there, but it’s something that’s more mental than physical ability. Physically we are almost there. The way we played today, we played like a top five pair,” said Shetty.

“We were leading 19-17 but they came back but we stood our ground and we didn’t give them any easy points, we made them work for every point. That’s what differentiates a top five pair from a top 10 pair.”

Having gone a year without a title, Rankireddy and Shetty are thrilled to have started the season with a win on home turf. With many more important tournaments coming up, the Indians’ appetite has been whetted.

“We’re not done yet. We’re happy but not fully satisfied. There are lot of important tournaments this year, it’s almost like an Olympic year. There are big ticket events like the Commonwealth Games, Asian Games, World Championships.

“Playing and winning in your home tournament is special. You always have that added pressure, so we’re really happy. Beating the Daddies in the final, it couldn’t have gotten better than this.”