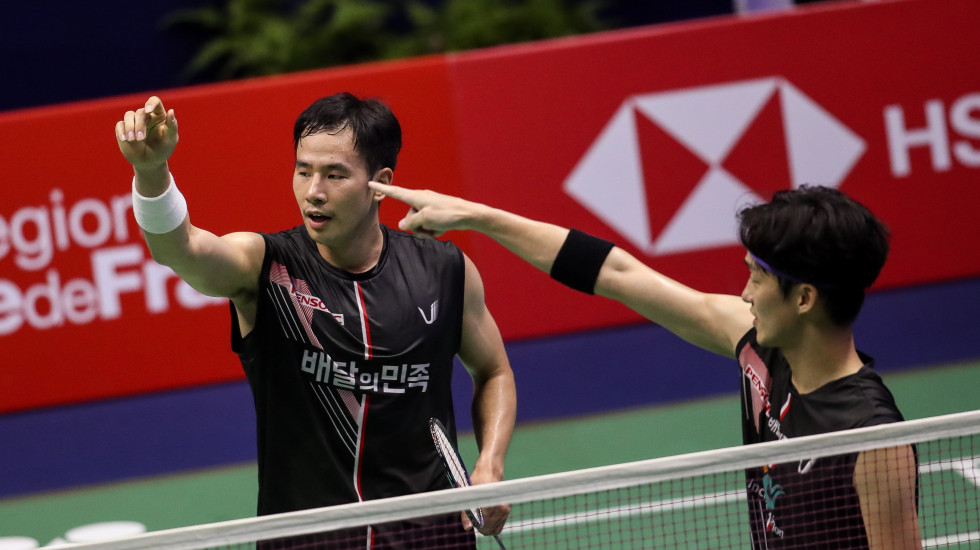 Veterans Ko/Shin Turn Back the Clock

The unlikeliest story of recent times played out as a once retired-pair reckoned to be over the hill outplayed the world No.1 duo to claim the YONEX French Open 2021.

Ko Sung Hyun and Shin Baekcheol, who hadn’t won a match in their last six tournaments, and whose last win of consequence was the Australian Open in June 2019, turned back the clock with a clever dismantling of Marcus Fernaldi Gideon and Kevin Sanjaya Sukamuljo.

It was a statement for an older generation over the best pair in contemporary men’s doubles. Ko, 34 years old, and Shin, 32, were among several top men’s doubles pairs to retire after Rio 2016; they returned in 2018 but with limited success. In the meantime, the Minions were establishing themselves as the best of the post-Rio generation.

But Ko and Shin showed today that their fundamentals were still intact; their defence could hold up against whatever the Minions could throw their way; they kept Sukamuljo from exerting his influence at the front, and they hit with precision and power when the opening came.

Ko won his third French Open title (he had one each with Lee Yong Dae and Kim Ha Na), and Shin his first.

“Before we came here we didn’t think we’d be able to win,” said Ko. “After each victory, we felt better, and today we are super happy. We left the national team a few years ago, and after the coronavirus, it’s our first time in a major final, so it was really important for us.

“Compared to younger pairs, we don’t have the stamina or energy, so it’s difficult for us to keep up with them. We have the experience and that helped us today. It depends on the conditions. Maybe today our condition was better than the Minions’.

“They’re really good players. It’s hard to compare them with our own contemporaries. There were so many pairs even back then who were better than us.”

Did they regret the lost years?

“We don’t have any regrets,” said Shin. “But during the time we weren’t playing we were upset wondering about our future. Now we are very happy we made it today. It’s my first final in France, so it has a deep meaning. After this, we will be more confident for the future in big matches.”

Their compatriots Lee Sohee and Shin Seungchan had earlier claimed the women’s doubles, retaining the title they’d won in 2019. It was a one-sided affair over their teammates Kim Soyeong/Kong Heeyong, with Lee/Shin winning 21-17 21-12.