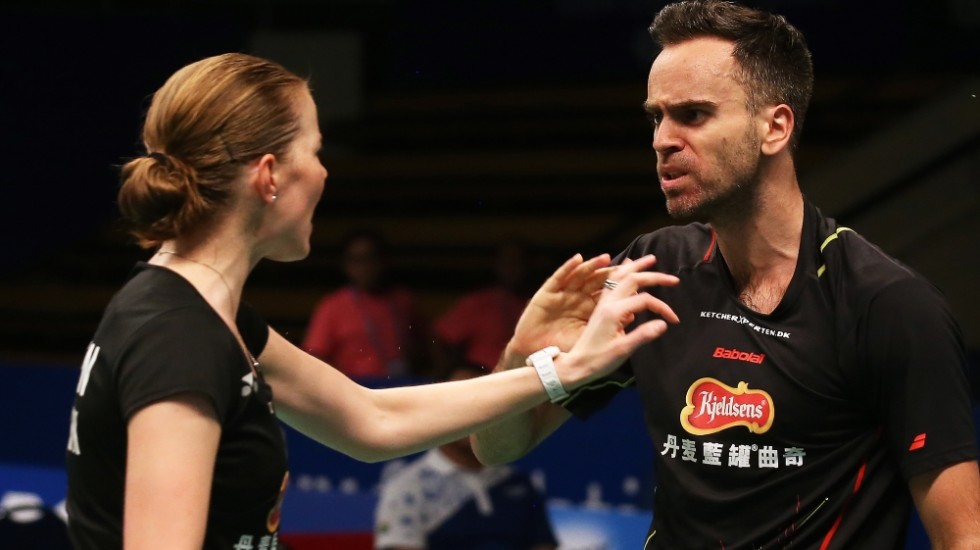 Fischer and Christinna Pedersen - one of the world's best pairs of their time.

In part 2 of our interview with Joachim Fischer Nielsen, the Danish mixed doubles great and now England coach talks about his anxiety about European doubles badminton, and what they must do to regain their place among the best.

What approach would you recommend for European pairs who seek to match the best Asian pairs?

I would like to see killer eyes in players, like it’s a life-and-death match. For example, me and Christinna (Pedersen), it was like each match was our last, if we lost we’d rather jump in the sea and drown. It was either win or nothing. That’s what I’m trying to get to the players now, that they need to have the drive, so this is really important. That this isn’t something you do for fun, then you cannot compete against the best ones if you don’t give 110 percent. Of course now the Asians have improved even more.

The post-Rio Olympics period saw the retirement or split of the best mixed doubles pairs of that time, players like Xu Chen, Ma Jin, Zhao Yunlei, Liliyana Natsir, Christinna Pedersen and yourself. Didn’t that vacuum pave the way for the dominance of Zheng Si Wei and Huang Ya Qiong?

Maybe you’re right, there were a few retirements. They (Zheng/Huang) got some of the years driving with the older generations. The players now from Europe haven’t had it this way. The gap is too big and it hurts me to see it. Even if I’m working in England, it hurts me to see the Danish players this way. We’re struggling in Denmark.

If you were currently playing, how would you handle Zheng Si Wei and Huang Ya Qiong?

I would definitely not play speed with them because they’re definitely way better. It’s a big challenge. First of all, to beat them, you need to believe you can beat them. When I see some of the pairs that go on court, they don’t believe they can beat them. Back in the day, Zhang Nan and Zhao Yunlei were also really good, but me and Christinna trusted we could beat them. And that’s the first step. Right now I see too many give up almost at the beginning.

I feel it, after five, six or seven shuttles they give up mentally. I would like to go back and have a body of ten years ago so I can start competing again (laughs).

Are Zheng/Huang actually playing faster than even Zhang and Zhao and others of that generation?

Yes, I think they are. But I also think their opponents let them play (at that speed). So in this way – of course, huge respect for them, they’re crazy good badminton players, probably among the best. I still think Zhang Nan and Zhao Yunlei at their top were at least as good also. The style was different. I think there’s too many players who give up now.

But a few pairs, Praveen Jordan and Melati Daeva Oktavianti in particular, have had success against the Chinese…

Jordan is also a bit old school, he has learnt from older generations. I think he’s an incredible player, it would’ve been fun to have a player like him in England. He’s such a great player. A few ups and downs, he’s like that in his career, but they need to expect it. He has his tournaments where he hits a level that you think is crazy high, and then maybe there’s a tournament you think how can he be that low. But that’s how his style is.

How does it feel to be back on the circuit?

It is nice to be back in this way, coming to countries where I had success winning tournaments, so everyone’s nice to me and my players. I like to be back on Tour, but let’s see for how long.