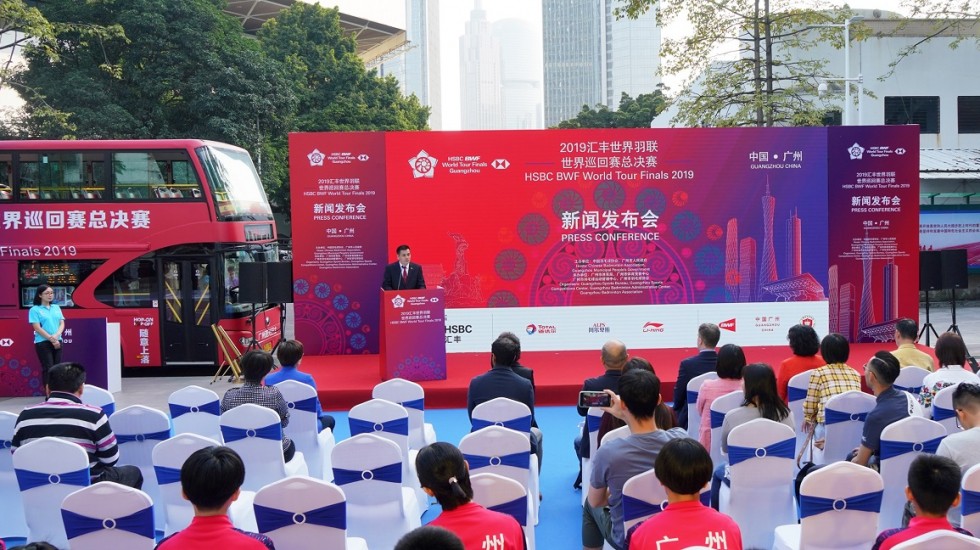 Launch of the promotional campaign for the HSBC BWF World Tour Finals 2019.

On Monday, the Guangzhou Municipal People’s Government and the Chinese Badminton Association, together with the Badminton World Federation, launched its promotional campaign for the HSBC BWF World Tour Finals 2019.

A Guangzhou City Double Decker Tourist Bus dressed with the World Tour Finals theme and mascot was unveiled at a press event in downtown Guangzhou.

The bus will be touring the city from 18 November up until last day of the HSBC BWF World Tour Finals on 15 December.

“The stunning city of Guangzhou is in its second year of staging the season-ending finale and we look forward to it hosting the Finals until the end of 2021.

“We have one last qualifying tournament for 2019 at the Gwangju Korea Masters this week and then we’re back here in Guangzhou on 11 December for the most electric competition of the year.”

The HSBC BWF World Tour Finals is the pinnacle of the badminton season as the athletes compete for their share of the biggest prize pool ever seen in badminton – US$1.5 million.

Ultimate glory awaits the Top 8 players and pairs who qualify throughout the year-long HSBC Race To Guangzhou across the five badminton disciplines.

It’s been an exciting season so far with many of athletes excelling in 2019.

Big names such as Kento Momota, Pusarla V. Sindhu and Mohammad Ahsan/Hendra Setiawan are already qualified thanks to their efforts at the World Championships.

The rest are in a frantic battle to qualify for the remaining positions.

** Top 8 athletes for each of the five events will announced when rankings are finalised on 26 November.

This year’s edition of the HSBC BWF World Tour Finals caps off an exciting second year in the partnership between the Badminton World Federation and its Principal Global Partner and title sponsor of the World Tour, HSBC.

Collectively, BWF and HSBC endeavour to make badminton one of the most popular sports globally.