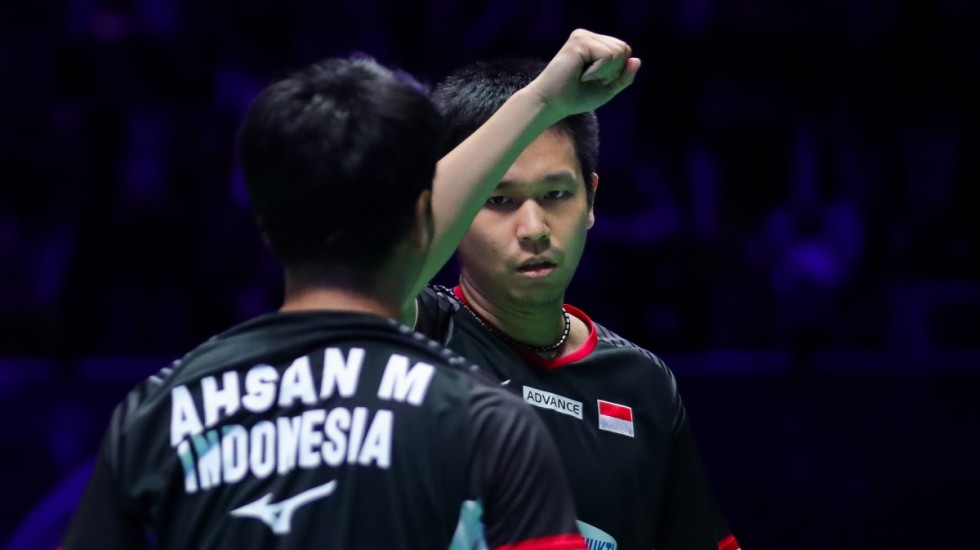 Mohammad Ahsan and Hendra Setiawan have been in sizzling form this season.

Mohammad Ahsan and Hendra Setiawan have regained their top place in the HSBC Race to Guangzhou Rankings thanks to their title win at the New Zealand Open 2019 on Sunday.

The Indonesians, who won the All England and were runners-up at the Indonesia Masters and the Singapore Open, traded places with Japan’s Takeshi Kamura and Keigo Sonoda.

The HSBC Race to Guangzhou Rankings will determine the qualifiers to the HSBC BWF World Tour Finals 2019 at the end of the year. Eight of the top pairs on the rankings list will be invited to Guangzhou, with a maximum of two pairs from each member association.

Another Indonesian pair, Fajar Alfian and Muhammad Rian Ardianto, who won the Swiss Open and were semifinalists at the All England and the Malaysia Open, are also in the Top 10, at No.6.

The high-profile duo of Marcus Fernaldi Gideon and Kevin Sanjaya Sukamuljo, who were at the top of the rankings for most of last season, slipped by three spots to No.9. The ‘Minions’ slipped in the first round of the All England and the quarterfinals in Malaysia, but made up somewhat with a last-four finish in Singapore.

Two Malaysian pairs – Goh V Shem/Tan Wee Kiong and Aaron Chia/Soh Wooi Yik – made progress, both climbing three spots to No.4 and No.5 respectively. A third Malaysian pair – Ong Yew Sin/Teo Ee Yi – are at No.10.

The other big gainers were Japan’s Hiroyuki Endo/Yuta Watanabe, who rose three places thanks to their runner-up finish in Auckland.

In women’s doubles, Korea’s Kim So Yeong/Kong Hee Yong made big gains from their title-winning exploits in New Zealand, rising six spots to No.7.

Matsutomo and Takahashi started the year well, fell to early defeats in England, Malaysia and Singapore, but recovered in New Zealand, where they were runners-up.

While China have a couple of pairs in the Top 10 – Chen Qingchen/Jia Yifan and Li Wenmei/Zheng Yu – three of their compatriots aren’t too far behind, signalling that China is recovering ground in this territory. Du Yue/Li Yinhui (No.12) have been getting better as a pair, while more will be heard of Dong Wenjing/Feng Xueying (No.13) and Liu Xuanxuan/Xia Yuting (No.15).

Malaysia have done well in mixed doubles, with two pairs in the Top 10 and one close behind. New Zealand Open champions Chan Peng Soon/Goh Liu Ying jumped up by one place to No.2, behind Singapore Open winners Dechapol Puavaranukroh/Sapsiree Taerattanachai.

Goh Soon Huat/Shevon Jemie Lai (No.6) have had a good season, with three quarterfinals and two semifinals, while compatriots Tan Kian Meng/Lai Pei Jing (No.11) started the year badly with four first round losses, but bounced back with a semifinal in Malaysia and a runner-up spot in Singapore.

Indonesia’s Praveen Jordan/Melati Daeva Oktavianti, who were runners-up in New Zealand, rose three places to No.3, just ahead of China’s Zheng Siwei/Huang Yaqiong, who fell to their first defeat this season in Singapore after three title victories.

The only European pair in the Top 10 in mixed doubles is England’s Marcus Ellis/Lauren Smith (No.9), semifinalists at the Spain Masters and quarterfinalists at three events.