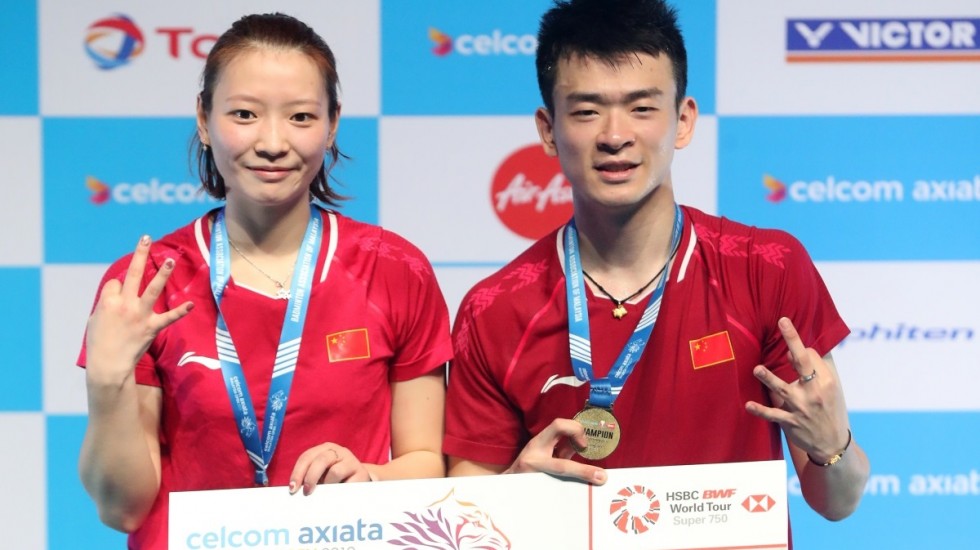 China swept the doubles events at the Celcom Axiata Malaysia Open 2019, with Zheng Siwei/Huang Yaqiong continuing their incredible victory streak for their third straight title this year – their 15th from 21 tournaments overall.

Wang Yilyu and Huang Dongping were one of only five pairs to beat Zheng and Huang all through 2018 – their last encounter, at the HSBC BWF World Tour Finals, had resulted in the challengers upsetting the favourites in a three-game thriller.

For a while in the opening game, Wang and Huang looked like they could pose a problem or two. But the second was a different affair – Zheng and Huang didn’t give their opponents a whiff of a chance. Huang was her imperious best at the net, while Zheng rained winners from the back. The end was quick and clinical – 21-17 21-13 to Zheng and Huang, giving them their third title from as many events this year, and adding to the 12 won previously.

“I think we won today because we were better prepared. We remained calm when faced with difficulties. This is in contrast to the All England where there were times when we felt lost and confused. Today we had all the answers and solutions,” said Zheng.

The All England champions had lost the last two encounters to their younger challengers, but today they were on the button from the beginning. Du and Li looked adrift for most of the match, and Chen and Jia had little trouble closing it out 21-14 21-15 in 37 minutes.

“This title win was unexpected. We had to prepare hard for this tournament particularly after our All England victory because we knew that other teams would be targeting us and analysing our game. We had to train hard and be well prepared. We were surprised when we defeated Matsumoto and Nagahara in the quarterfinals. We were lucky in this tournament,” said Jia Yifan.

The last match of the day – the men’s doubles between Li Junhui/Liu Yuchen and Takeshi Kamura/Keigo Sonoda – was also one-sided. The Chinese duo repeated their World Championships final result over Kamura/Sonoda, producing a display of big hitting and astute defence to deny their opponents any opportunities.

It was the biggest win for Li and Liu since the HSBC BWF World Tour Finals triumph in December.