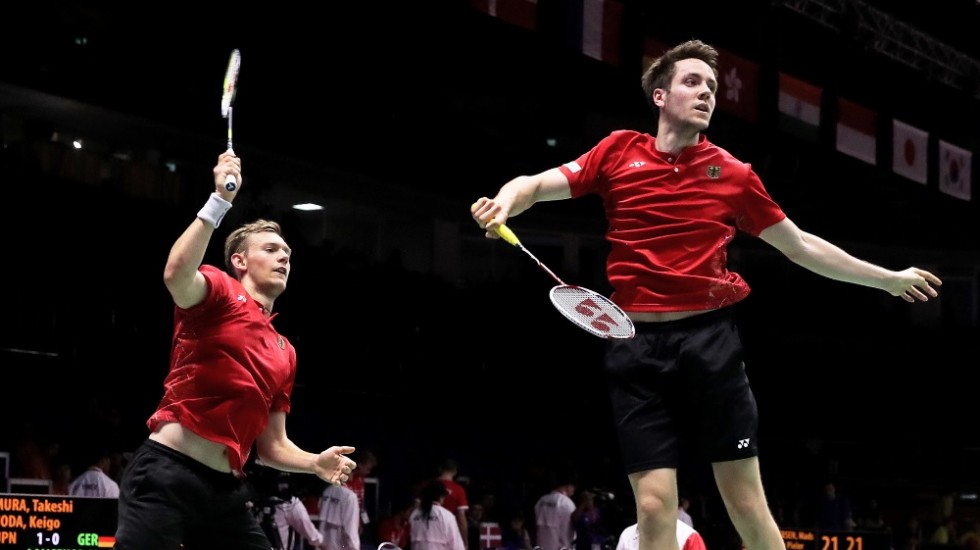 Lamsfuss/Seidel Gear Up for All England

Despite a fairly modest start to the season, Mark Lamsfuss and Marvin Seidel head into the YONEX All England Open confident of turning their fortunes around.

The German men’s doubles pair had some promising performances early this season, but they weren’t quite able to capitalise on them. Among their best shows was at the Indonesia Masters, where they stretched top seeds Marcus Fernaldi Gideon and Kevin Sanjaya Sukamuljo in three tight games.

That performance was followed by a quarterfinal finish at the Barcelona Spain Masters, where they lost in three games to Chinese Taipei’s Lu Ching Yao/Yang Po Han. This week though, at the German Open, Lamsfuss and Seidel were in for a disappointment at home as they crashed in the second round to Malaysia’s Ong Yew Sin/Teo Ee Yi.

The Germans had hoped for a stronger showing at home, and acknowledged that they had to get over the second round loss.

“Of course it would have been nice if we could have kept up with the level we showed in the recent tournaments at German Open as well, but we have to look forward to next week and fill our tanks, so we can step up our game again,” said Seidel.

Next up is the All England, and the Germans were hopeful that they could string it all together for a podium place.

“Going to the All England means a lot to us, as it’s the most prestigious tournament of the Tour and I think every badminton player is dreaming about standing on top of the podium once in their career. So do we,” said Seidel.

“The most important thing for playing good next week is to truly believe in our strengths and that we go on court with a lot of confidence. Everything else will come together then.”

In Jakarta, the Germans were up a game and 13-8 in the second before the ‘Minions’ clawed their way back after winning a close second game. This was the third time in four matches that Seidel and Lamsfuss had taken the World No.1 duo to three games.

It was affirmation that, on their day, they could prove to be a handful for the best in the world.

“We’re quite happy with our performance, but also a bit disappointed as we wanted to win this but we knew they’re one of the best pairs of all time, so we’re proud we won a game,” said Lamsfuss, following the 14-21 21-19 21-15 loss in the first round.

“Kevin’s speed is pretty incredible, especially how fast he sees things and rushes to the net. But I think if we train hard and keep improving, we can beat them one day,” said Seidel.

Despite the narrow loss, stated Seidel, there were gains to be proud of.

“We’re getting more confident with every game. This one helped us again, as we can go into matches where we can play weaker opponents than Kevin and Marcus, and there we will be more confident and believe more in ourselves.”

Among their memorable results over the past year were a title win at the Orleans Masters and a runners-up spot at the Canada Open. They will seek to now step up a notch and make a mark at the top-tier events.