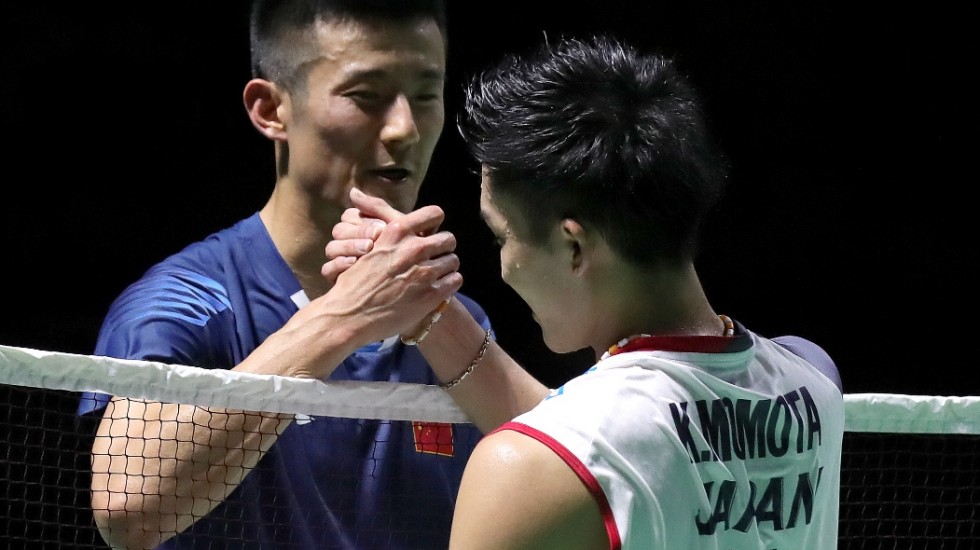 One World champion survived while the other perished today in two singles semi-finals that proved mental tests at the Fuzhou China Open 2018. 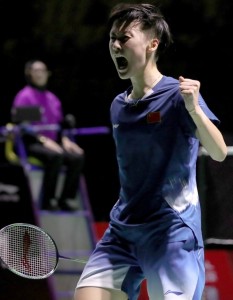 Men’s Singles king, Kento Momota (featured image; right), brushed off the loss of the opening game versus China’s Chen Long (featured image; left) to emerge victorious in their first battle to go the distance: 19-21 21-17 21-17 in 97 absorbing minutes. By contrast, Women’s Singles World champion, Carolina Marin, failed to convert her first-game ascendancy over Chen Yufei. The talented Chinese buckled down and challenged Marin shot for shot, creating opportunities and taking her chances to savour her first success against the usually-lethal left-hander: 11-21 21-15 21-13 in 65 minutes.

Having been blitzed in the first game – with Marin surrendering just two points after the interval and appearing on track for another demolition – Chen Yufei played well to rebound in the second game and then dominate the decider. Winning a 40-shot rally to propel her to 18-11 in the third game was among the highlights of Chen’s comeback as she kept her composure and pressured Marin into submission. Uncharacteristically, an increasing number of errors flowed from the Spaniard’s racket, with Marin straying over the baseline on the last two points of the match; Chen punching the air triumphantly.

“Before the match, I think we have 50-50 chance – although I am not the best all-round player and it is possible to lose a few points in succession. However, I have learnt a lot from the past. I have to keep calm and find a way out,” said 20-year-old Chen.

“Compared to the past, I am more confident now. Whether I’m leading or trailing, I fight bravely to the last point.”

Fate was not as kind to her male namesake as Chen Long’s best efforts were not good enough to beat Momota in a compelling, cat-and-mouse duel that swung one way and then the next, hinging on fine margins and which player was sometimes prepared to go for broke.

Having beaten Momota in the semi-finals in France last month, a rejuvenated Chen held firm late in the opener to snatch the lead with three straight points from 18-19 down. Momota repaid the compliment in the second, despite watching a 14-8 advantage melt to one point at 18-17. It was then the World champion’s turn to reel off three unanswered points to ensure their first three-game encounter. 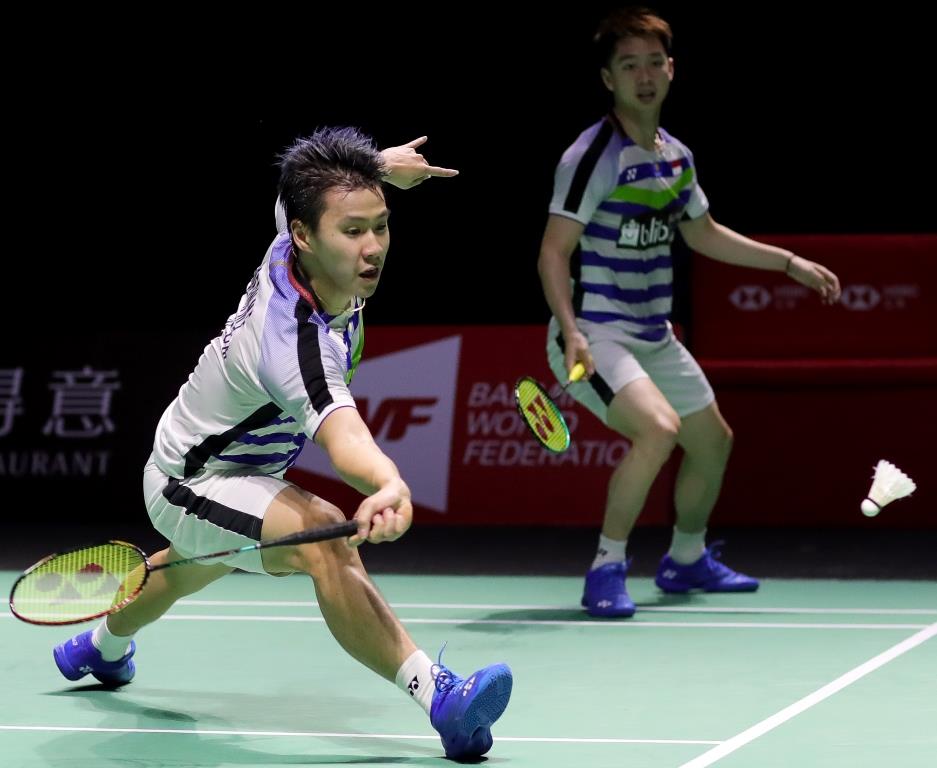 The decider began in cagey fashion, with the two players trading blows until Chen benefited from some charitable errors by Momota to grab a four-point lead. At 9-13 down, the Japanese sensed the urgency to sharpen his strokes and he forged ahead to 17-14 but Chen was not done yet. He then fought to draw level 17-17 but, having done that hard work, the Olympic gold medallist then committed four costly mistakes to hand Momota victory.

“I didn’t get the key points to win the match. When I was 13-9 ahead in the third game, I played too cautiously. It was my own fault,” assessed Chen.

These semi-finals were a far cry from the other two which determined the other singles finalists. In the first Men’s Singles semi-final, Chou Tien Chen of Chinese Taipei crushed Shi Yuqi, 21-11 21-10, to extinguish any chance of an all-China finale. In the second Women’s semi-final, Japan’s Nozomi Okuhara did likewise, stopping He Bingjiao (21-13 21-13 to deny China securing the championship ahead of tomorrow’s finals.

“The main reason for my victory today was that I moved better than Bingjiao. I know that Chen Yufei will have the crowd support tomorrow which is a huge advantage. However, I will give my best and try to be patient,” said 23-year-old Okuhara.

Meanwhile, Men’s Doubles top seeds Marcus Fernaldi Gideon/Kevin Sanjaya Sukamuljo advanced to the championship match with a strong comeback versus Liu Cheng/Zhang Nan. The Indonesians inflicted another disappointment on the home contingent, winning 17-21 21-18 21-14. There is still a chance for China to lift the title though as He Jiting/Tan Qiang overcame Indonesia’s other semi-finalists, Mohammad Ahsan/Hendra Setiawan, 21-14 21-15. 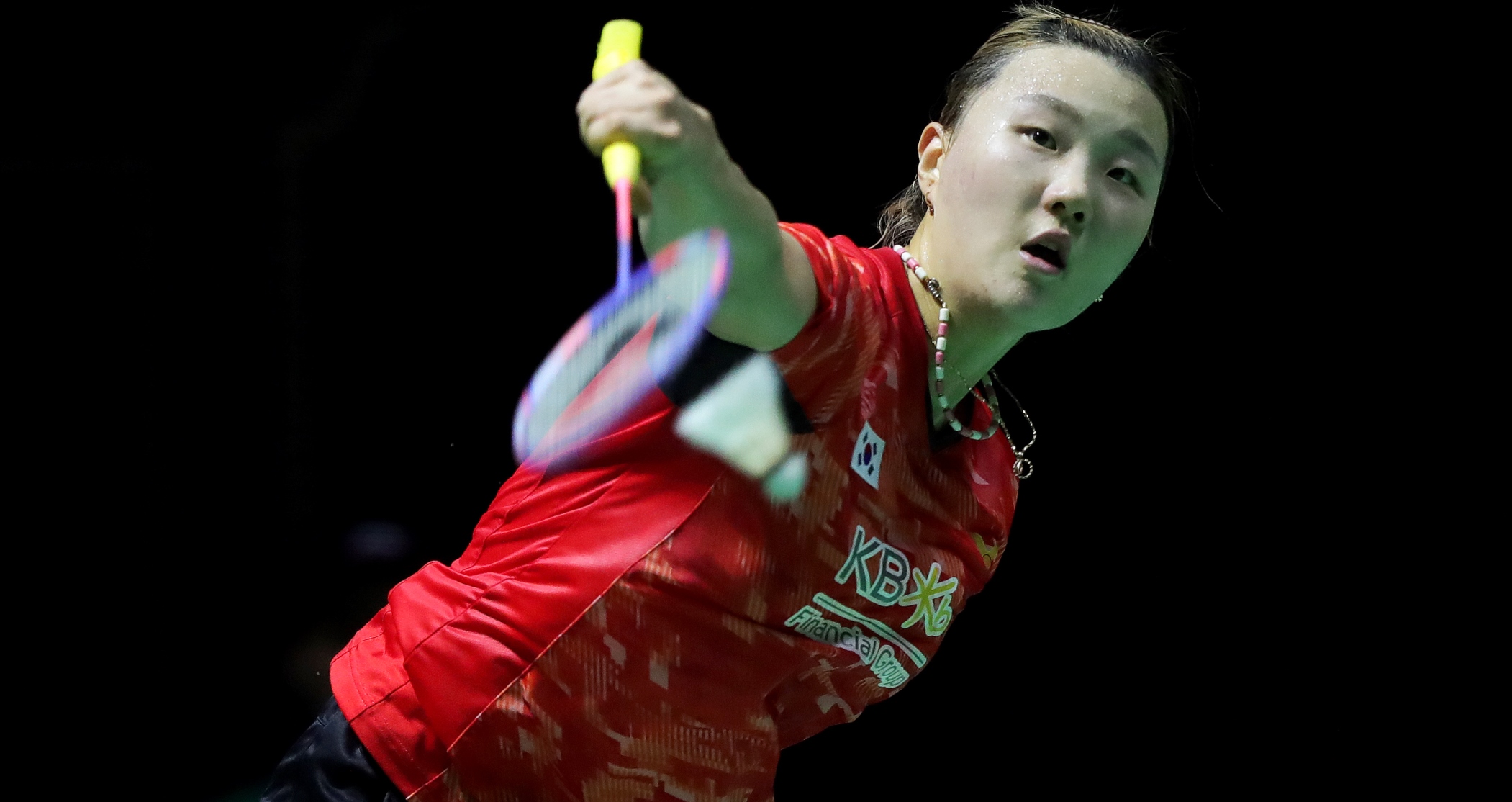 In Women’s Doubles, Japanese World champions Mayu Matsumoto/Wakana Nagahara will face Korea’s Lee So Hee/Shin Seung Chan for the title. The latter beat Japan’s Misaki Matsutomo/Ayaka Takahashi 21-16 21-12 to advance to the final while Matsumoto/Nagahara saved two game points in the opener to thwart another Korean duo, Chae Yujung/Kim So Yeong (24-22 21-16).

The hosts assured themselves of the Mixed Doubles crown as Wang Yilyu/Huang Dongping swatted aside their Japanese challengers, Yuta Watanabe/Arisa Higashino, 21-14 21-6. They will oppose their Chinese team-mates and top seeds, Zheng Siwei/Huang Yaqiong, for the title. The latter breezed past another Chinese pair, He Jiting/Du Yue (21-12 21-12) in 24 minutes. 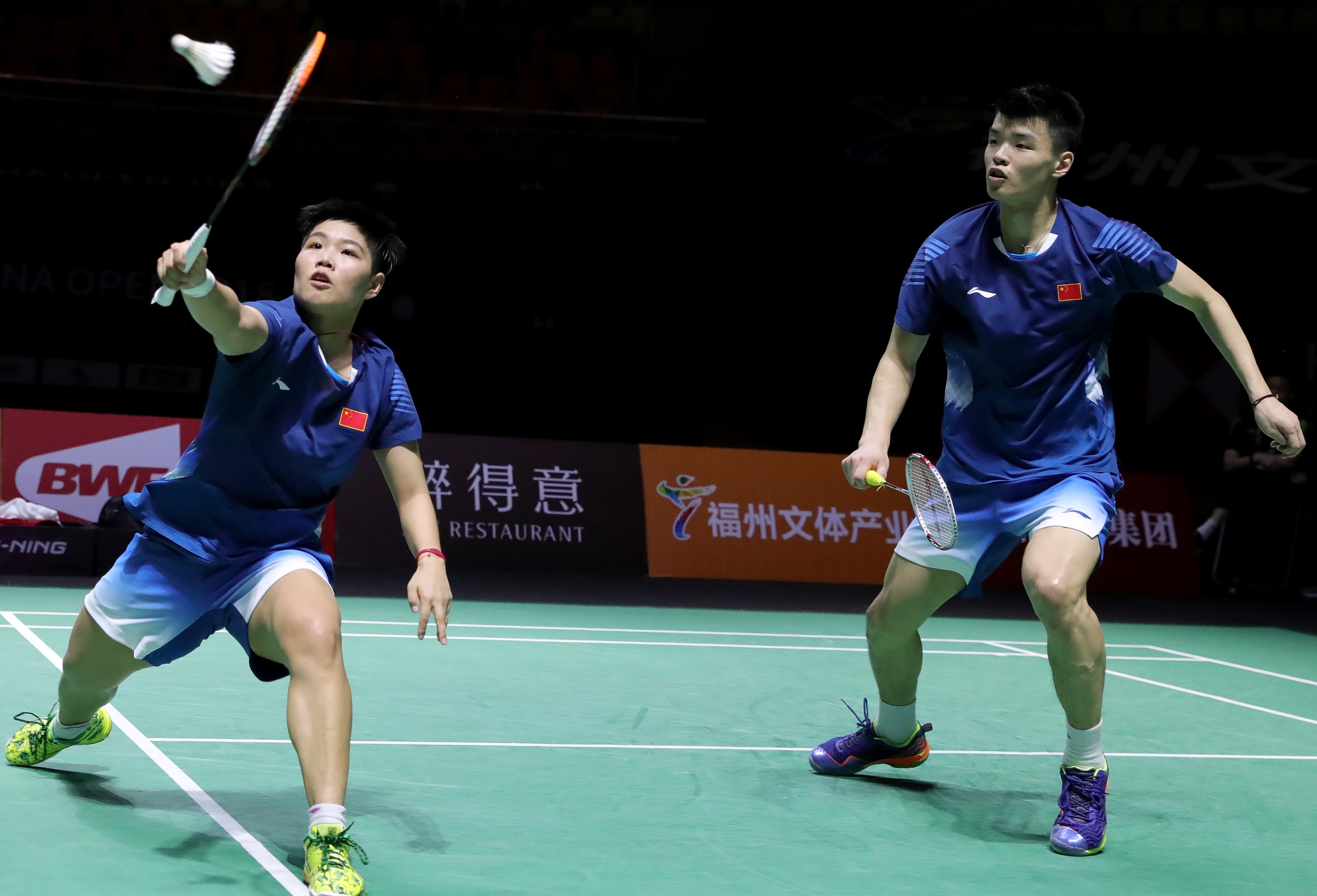