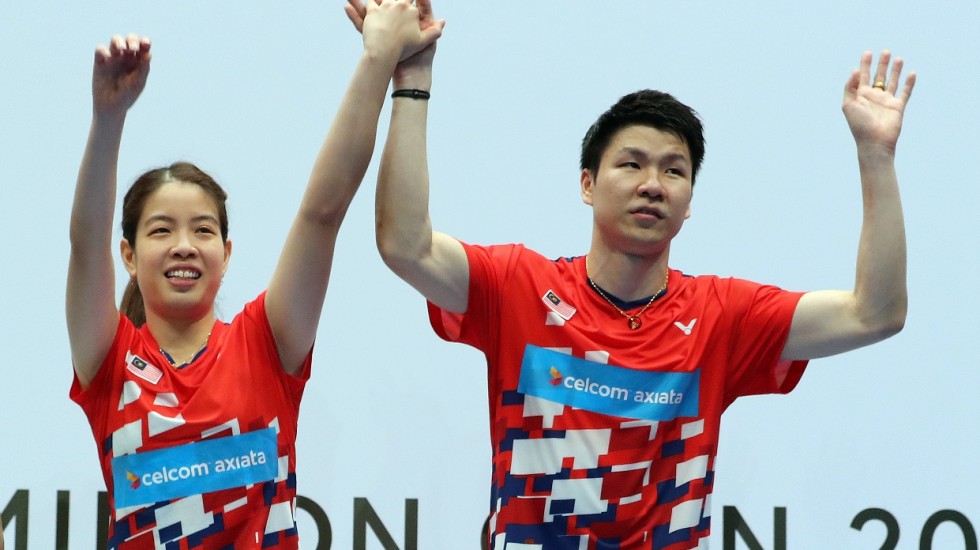 The Malaysians (featured image) upset the iconic duo, 21-19 21-18, to revel in the finest moment of their Mixed Doubles career at Singapore Indoor Stadium. The No.2 seeds signed off the 36-minute battle with a one-two attacking flourish. First, Goh deftly manoeuvred his partner out of the way to hammer another

thunderous smash to bring up match point and then, on the next point, happily stood by as left-handed Lai struck a trio of sharp shots – the last of which sealed the deal.

The way they ended typified their mindset throughout, authoritative and not in the least bit awestruck in their first clash with the World champions.

By contrast, Ahmad and Natsir found it tough to rouse themselves to their brilliant best. Two weeks after handsomely beating Goh and Lai’s more illustrious team-mates, Chan Peng Soon and Goh Liu Ying, for the coveted Indonesia Open crown, the top guns could not break down these Malaysian opponents. However, innate instinct and ability brought the world No.1 partnership back into contention in both games but, on either occasion, their rivals kept faith with the offensive tactics that had gotten them thus far and impressively withstood the mid-game comebacks. That belief paid off – ultimately to the tune of US$28,045. “They have more experience than us, so our game plan was to keep attacking. This is our first title at this level and we’re very excited,” said Goh whose killer smashes were a constant problem for the runners-up.

His beaming partner, who was lethal in the front court, noted that whenever Ahmad and Natsir drew level in the score, they were determined to be steady and maintain their focus. Added to that, Lai said it was “an honour” to play the champions before Natsir retires; something which she has hinted will be sooner rather than later.

Assessing the defeat, Natsir rued the inconsistent performance which she and Ahmad gave in the final. She pointed out, however, that with one week’s preparation after triumphing on home turf, they were “surprised” to reach the title-decider.

“We wanted to win the title – and we were very close – but we just couldn’t keep our focus. It is a lesson that will help us improve as we prepare for the Asian Games,” said the 32-year-old who was seeking her sixth title in her eighth Singapore Open final.

Another factor, Ahmad highlighted, was the pace at which the Malaysians played.

“There were many points where we slowed down the tempo of the match when we should have played faster. They are a young and very fast pair but we should have been able to match their speed,” he said.

There was some joy for Indonesia as another veteran duo conquered younger opponents to capture the Men’s Doubles crown. Showing they can still produce quality performances, Mohammad Ahsan and Hendra Setiawan stormed past Ou Xuanyi and Ren Xiangyu – 21-13 21-19 – in just 30 minutes to close the tournament. There was a nervous stutter at the end as Ahsan/Setiawan watched six of their seven match points evaporate as the Chinese fought gallantly from 13-20 down to 19-20, before a fierce Setiawan smash secured the honours.

In their post-match interview, the winners said they hope this title will trigger more success, similar to what they previously experienced.

Though it was an all-Japan affair, the Women’s Doubles showdown proved a riveting battle which saw Nami Matsuyama/Chiharu Shida on the cusp of victory before Ayako Sakuramoto/Yukiko Takahata doggedly wrestled the match from their grasp.

The encounter looked headed for a third game with Sakuramoto/Takahata ahead 20-16 in game two, with their team-mates having won the opener. Suddenly, the scores were locked 20-20 and Matsuyama/Shida attacked to grab two match points, both of which were resolutely defended as Sakuramoto/Takahata ensured a decider which they then dominated to claim their fifth crown in five Tour finals this year: 16-21 24-22 21-13 in 70 minutes. “We lost the first game because we were defending more than attacking. We changed our strategy in the second and third games and this was successful,” said Sakuramoto.

Surprised by their winning streak, the victorious duo insisted they will not focus on their finals record but rather on improving so they can beat higher-ranked pairs.