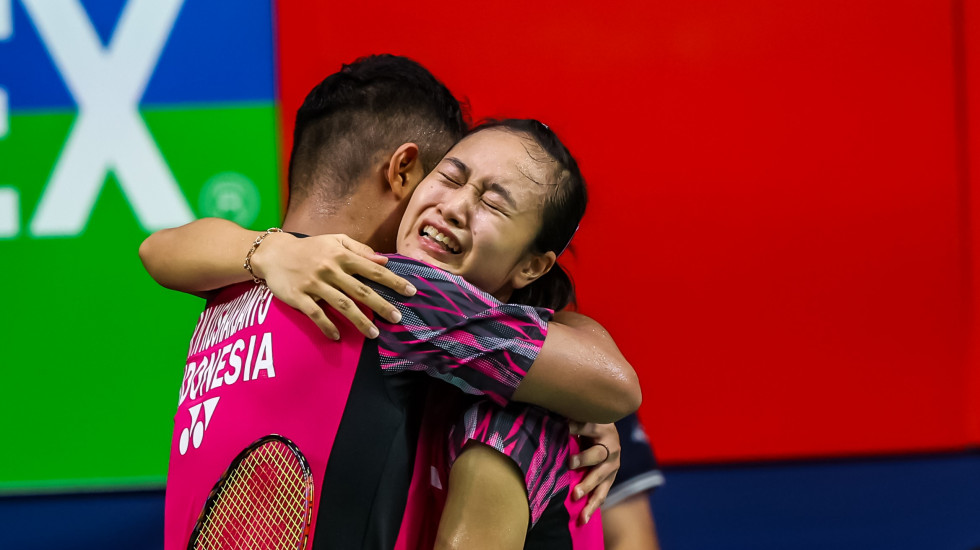 French Open: Not Here to Make Up Numbers

“We studied their serving technique last night, their movement and rotations,” revealed Kusharjanto, whose bout against Terry Hee/Jessican Tan was the last of Thurday’s matches.

The Indonesian world No.30s, who also defeated their higher-ranked opponents in March in the Swiss Open quarterfinal, take great encouragement from their outing in Paris. In their opening match, the young pair, both 22, overcame Goh Soon Huat/Lai Shevon Jemie in straight games.

“This is proof we can go far, we can beat the top pairs,” said Kusharjanto. “We are not here to make up the numbers. We lost the first game but in our minds, we weren’t beaten. I was constantly reminding Lisa we should amplify our attacks as they were losing their composure.”

The noisy home fans at Stade Pierre de Coubertin tried their best to carry Gicquel and Delrue over the line but Kusharjanto/Kusumawati used it to their advantage.

“The thought of beating them in their backyard and silencing their crowd fired me up. I told Lisa ‘let them scream their lungs out, we will not be perturbed’,” said Kusharjanto.

An exhausted Kusumawati broke down at match point.

“They were tears of joy, an outpouring of happiness,” she said.

Though deflated, Delrue paid credit where it’s due.

“They are getting better and better. They are going to be tough opponents for many years because they are young,” she said.

Another pair through to their first Super 750 semis are Malaysians Pearly Tan and Thinaah Muralitharan, whose 15-21 21-14 21-14 victory over third seeds Nami Matsuyama/Chiharu Shida is their first in seven meetings.

“We didn’t think about the head-to-head. We just focused on ourselves and believed we could win. And we trusted each other, which helped us along,” said Muralitharan.