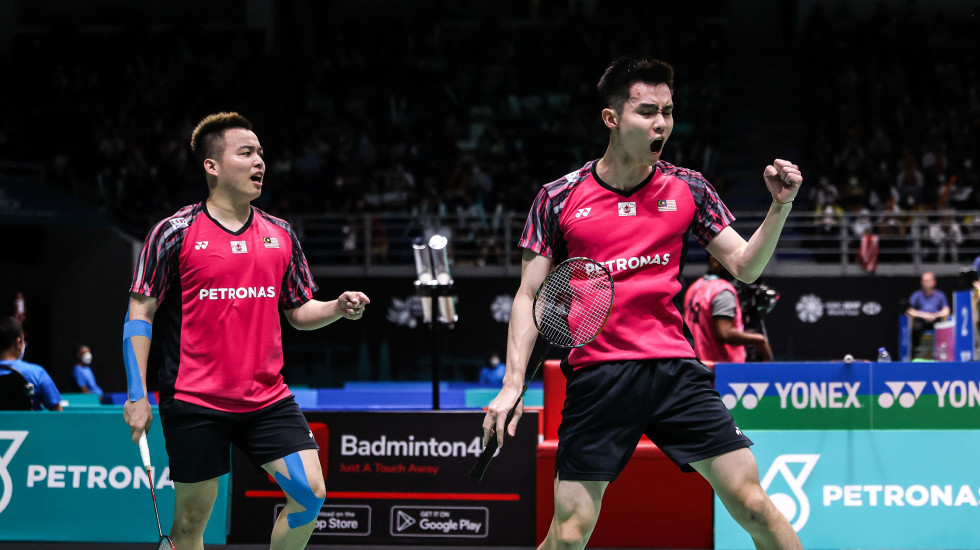 Backed by a near-capacity crowd, Malaysia’s players gave their fans plenty to cheer about on the second day of the PETRONAS Malaysia Open 2022.

The tone for the day was set by new partners Chen Tang Jie/Valeree Siow, who punched above their weight in taking down Yuki Kaneko/Misaki Matsutomo, 21-16 14-21 21-10. Pearly Tan/Thinaah Muralitharan then weathered the challenge of China’s Liu Xuan Xuan/Xia Yu Ting, before Aaron Chia/Soh Wooi Yik, Lee Zii Jia, and Anna Ching Yik Cheong/Teoh Mei Xing rounded off a profitable day for the hosts.

Valeree Siow, who’d won her women’s doubles opening round yesterday with Low Yeen Yuan, said the crowd’s backing had inspired them against world No.16 duo Kaneko/Matsutomo: “I can’t be on fire every day, but the crowd helped me get that fire today. Whether you play one event or two, it’s hard and tiring. I always have faith, whether in women’s doubles or mixed doubles. Tang Jie gave me confidence, I feel very happy to have him as a supportive partner, and I appreciate his support.”

The young Malaysians will take on Olympic silver medallists Zheng Si Wei/Huang Ya Qiong, who are on a red-hot streak now, having won four events in a row.

“We are confident, our next opponents are the former world champions and Olympic silver medallists, and we hope to give the fans a good match,” said Chen Tang Jie.

“We still have to improve, still need to learn a lot. We need to give Valeree some time because she’s also playing in two events… I can only do my best to lead her and give her the confidence because she is still young.”

Aaron Chia/Soh Wooi Yik were involved in a tight contest with Akira Koga/Taichi Saito; the Japanese had the opportunity to take the match into the decider with a 19-17 lead in the second, but the Malaysians kept things tight to take the last four points, 21-18 21-19.

Another home star, Lee Zii Jia, started patiently against Ireland’s Nhat Nguyen before stepping on the pedal and closing out the match in 47 minutes, 21-15 21-11.

♦ Having beaten Kim Astrup/Anders Skaarup Rasmussen in an exciting contest in Indonesia two weeks ago, Choi Sol Gyu/Kim Won Ho repeated the feat in a match just as intense, 24-22 14-21 21-17.