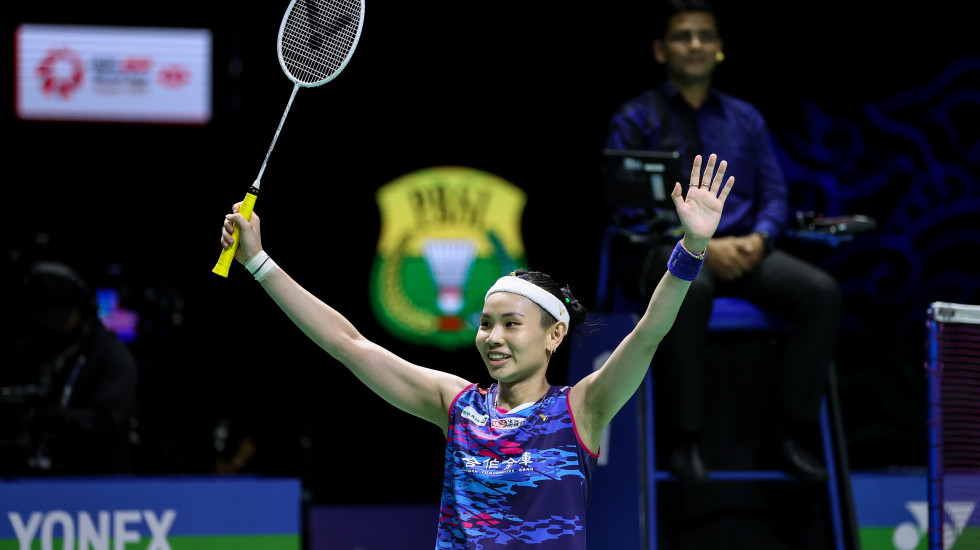 Tai Tzu Ying got into her groove as the match progressed.

Tai Tzu Ying gave herself a nice gift for her 28th birthday tomorrow with the EAST VENTURES Indonesia Open 2022 title, but true to character, gave all her fans plenty of heart-stopping moments before taking home the title.

Tai has talked all week of cutting down her errors, but she gift-wrapped the opening game for Asian champion Wang Zhi Yi with several wayward shots. The errors flowed liberally, and it was only the sheer genius of touch and imagination that kept her in the hunt.

Yet, that was only a curtain raiser to what was to follow, for once she got into the match, it was her show all the way. The shuttle did her bidding, both at the net where she coaxed it over the tape time and again, and through the implausible angles that she conjured.

Wang’s physicality kept her going until midway through the third, but Tai was unusually driven today, pumping her fist for every winning point, and a final trick at the net made it a wrap for her fourth World Tour Super 1000 title.

“Yesterday I had a tough match so I thought I’ve already made a difficult journey, so I had to make the best of my opportunity,” said the winner.

“All my titles are special to me, and so is this one. It’s been long since I played in a full-house stadium. I’m happy to be playing here in Indonesia. I feel the fans have helped me a lot.”

Wang, outclassed, was all praise for the winner: “This was our first match. I really want to learn from her. I had a lot of difficulties facing her, she really is a class player. I’d prepared a lot by watching her videos, but the feeling is very different when you play her; her tempo is very good and her attack is very fast.”

Nami Matsuyama and Chiharu Shida became the first women’s doubles pair to win three consecutive Super 1000 titles after the Indonesia Open 2021 and the All England 2022. Matsuyama and Shida’s third title of the season came with a come-from-behind win over compatriots Yuki Fukushima/Sayaka Hirota 18-21 21-14 21-17.

Zheng Si Wei and Huang Ya Qiong’s fourth consecutive title and 32nd overall came with a 21-14 21-16 takedown of third seeds Yuta Watanabe/Arisa Higashino. The Olympic silver medallists were in outstanding form, barely making any mistakes and giving their opponents no room for a fightback.

“They were simply too good for us today,” said Watanabe. “We just didn’t have a chance.”