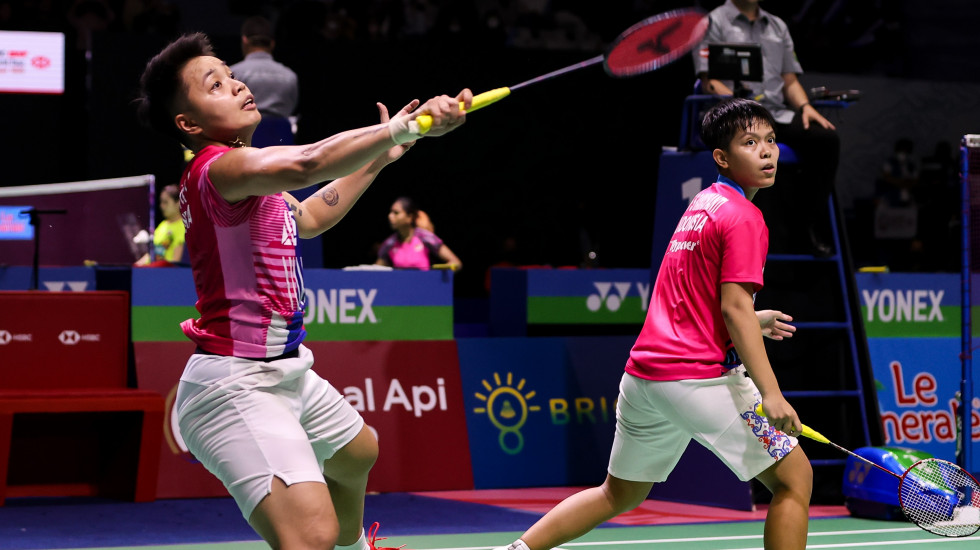 Scarcely has the applause from Greysia Polii’s testimonial day died down, and already the Indonesians can look forward to a combination likely to take forward her legacy.

Polii’s former partner Apriyani Rahayu and Siti Fadia Silva Ramadhanti continued from where they left off at the Indonesia Masters last week, taking down two-time world champions Mayu Matsumoto/Wakana Nagahara at EAST VENTURES Indonesia Open 2022 today. Following their wins over pairs like Lee So Hee/Shin Seung Chan and Pearly Tan/Thinaah Muralitharan last week, the upset of Matsumoto/Nagahara was another big step forward for the new combination in only their second tournament together.

For someone still in her early days at this level, Ramadhanti showed no sign of not belonging. She picked off winners from the front court and back, ably complementing her senior partner.

“We are very thankful that it went well for us; the combination was very good,” said Rahayu. “The key to our success was our communication.”

Their vanquished opponents complimented their playing style. “They surprised us,” said Matsumoto. “They play at a fast rhythm, which is unlike the earlier combination of Apriyani and Polii. We will have to prepare better next time.”

One more piece of the jigsaw fell in place for MR Arjun and Dhruv Kapila as they rode on the high of India’s Thomas Cup win last month to clinch their second round place at the Indonesia Open.

Part of India’s history-making team, Arjun and Kapila said the heady experience had infected the whole squad with greater confidence, and the difference was apparent in the way they handled the last phase of the match today against Japan’s world No.30 pair Keiichiro Matsui/Yoshinori Takeuchi.

“Confidence has been a key element for us in winning the Thomas Cup, and even though we ourselves didn’t get to play towards the knockout stages, the team winning has boosted all of us in the team and back in India as well,” said Arjun. “We have been losing to the top pairs after leading at the interval. So we’re very excited that it came to us this time.

“I think the difference was that we kept pushing towards the end as well. I think we managed to do that, we played an 83-minute match now, so that says it all.”

The Thomas Cup win, Arjun says, has changed the outlook towards badminton back home.

“The whole country has become aware of the sport as such. In a cricketing country like India, badminton making a difference is huge.

“We had felicitations, but Mathias (Boe) and Gopi (head coach) made sure we returned to training after three days. That’s why we withdrew from the Indonesia Masters, so that we could get two weeks of preparation.”

Prannoy In a Hurry

HS Prannoy’s form of recent months, and the influential role he played at the Thomas Cup, continued to hold, ironically against teammate Lakshya Sen, who didn’t stand a chance today. Prannoy was in all-conquering touch, and Sen was left scrambling all through the match.

“There’s a lot of positive things happening around us as players post-Thomas Cup,” said Prannoy. “You can see a lot of positive energy at the practice sessions. That’s really important. Winning the Thomas Cup was one of the events that gave a boost to the entire sports ecosystem in India. For the players out there practising, suddenly you get the belief that the thing that we didn’t think possible happened and that gives extra energy. And coaches also get really involved. That showed post-Thomas Cup.”