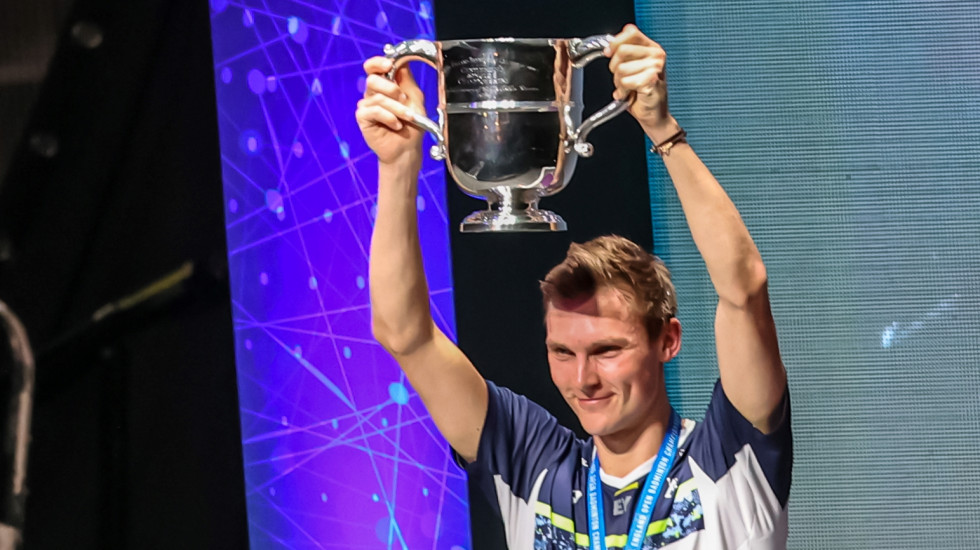 Viktor Axelsen looked lovingly at the trophy in his hands. For the briefest moment there was a catch in his voice. “There are some big names here,” he said, running his eyes down the list of champions inscribed on it.

His own name will be added a second time, after the Dane delivered yet another impeccable performance in a major final. It was his second YONEX All England title from his fourth straight final in Birmingham.

Whatever expectations there might have been on Lakshya Sen to repeat his German Open semifinal win over Axelsen last week were shut out early by the big Dane. In previous matches this week the 20-year-old Indian had built most of his capital around the net; Axelsen nullified that advantage with a range of flicks and lifts to the deep, from where Sen was unable to hurt him. There were very few moments when the Dane’s fort was breached; for the most part he was always in balance, repelling the Indian’s attack when it came, while there was an air of evitability every time he rose in the air for a kill. Sen’s defence has been an outstanding feature of his game, but Axelsen’s smashes were simply too steep and too precise for the Indian to stay in the hunt.

“My strategy was in place and I’d played him last week but today he was solid in defence and attack,” Sen said. “I didn’t get that many opportunities to play the net. Every time I played the net he lifted to the deep or flicked me. In the build-up and pressure he played a really good game. He was too solid for me to put the shuttle down.”

Axelsen soaked in the victorious moment, keenly aware of the history and significance of the event.

“There’s a lot of history right here, and to be part of that history is a dream come true. I still have a lot of years in me hopefully, so I’m beyond excited about this.

“It feels exactly the same as the first time. I’m so relieved in a way, because it’s so hard to get into these finals, so you also have to grab the chances when you have them, and I’ve managed to grab two and I’m really stoked about that.

“I wanted to come in pretty aggressive, with a high pace, and I think Lakshya also had a hard match yesterday, so I knew he was a little bit tired. I played with great variation and great determination and it paid off. I was a bit passive in the second, and he’s a physically and mentally strong player, so you have to dare to do some stuff.”