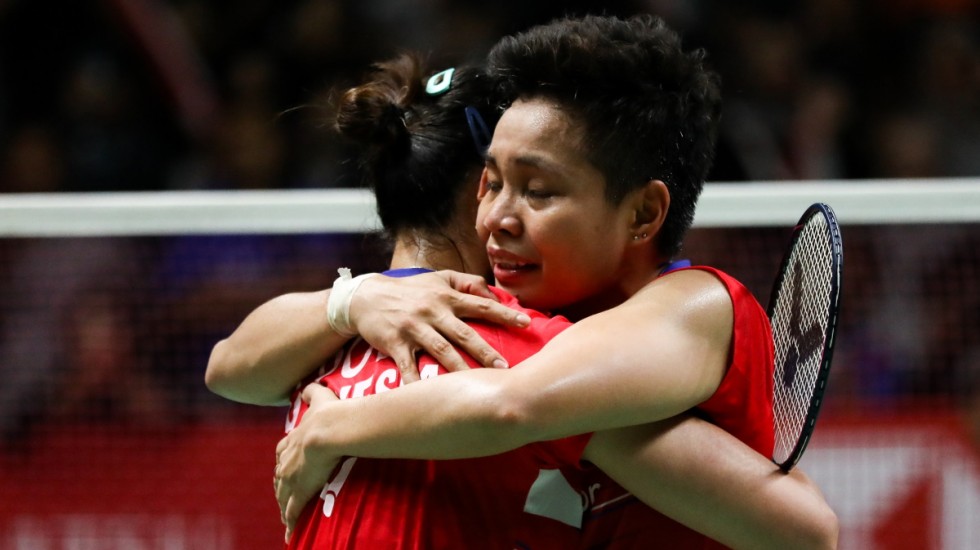 A narrow win for the Indonesians in a great final.

Greysia Polii and Apriyani Rahayu held their nerve in a pulsating women’s doubles final to capture their biggest title on home soil, at the DAIHATSU Indonesia Masters 2020.

Polii and Rahayu survived by the skin of their teeth as Danish opponents Sara Thygesen and Maiken Fruergaard had two match points at the end of a marathon 80-minute encounter, which finally went the way of Polii and Rahayu, 18-21 21-11 23-21.

It was a battle between the Danes’ heavy hitting and opportunistic forays to the net, and the Indonesians’ ability to keep defending for long. Thygesen and Fruergaard, aiming to become the first Danish pair to win a top-tier title since Christinna Pedersen and Kamilla Rytter Juhl at the All England of March 2018, had the upper hand through the early part with their aggressive game, before the Indonesians worked their way back by lifting the shuttle to the deep, beyond the interceptions by the front court player.

Polii and Rahayu could sight victory at 18-15 in the third, but the Danes showed great character, refusing to let go of the attack in the interminable rallies. They had match points at 20-19 and 21-20, but each time the Indonesians defended stoutly; Rahayu then stepped up and her precise hitting under pressure sealed the win for Indonesia.

“It’s really mixed feelings, we’ve had a really good tournament, so we have to be happy,” said Thygesen. “We threw away two championship points, that’s how it is, they’re a little bit more experienced, and they used it at the end today.

“We played quite well, and if trust ourselves, we can be up there among the best. We still have a lot of things to work on. We’ve shown some good stuff now and we’ll try to improve from here.”

“In the second game we tried to accept that it was going to be hard, and tried to keep it cool and be in the rallies and not give up,” said her partner Fruergaard. “Just keep going mentally. I’m quite proud of how we came in the third game. Disappointed of course, we almost had it at 20-19 and 21-20, but credit to them. We were tired but we really put a lot of energy into it, nervous energy that we needed.”

Polii, who had warmly embraced the Danes after the match, paid tribute to their fighting spirit.

“We’re of course happy that we won our biggest title in Istora, it’s a big thing for us,” said Polii. “We just tried to make the rallies long and stay alive. To be honest we were very tired and dizzy. From the beginning we never thought think about the outcome, we just wanted to keep improving.”