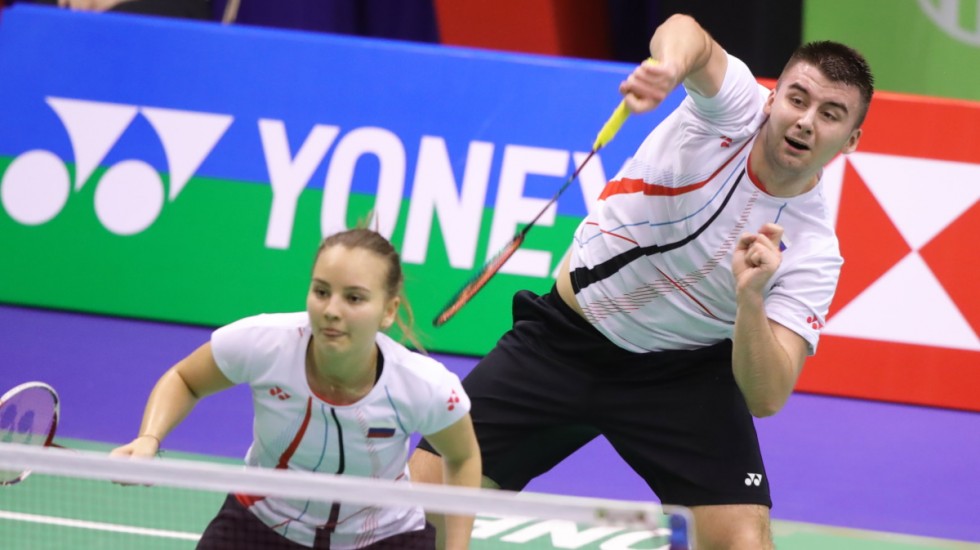 Russia’s Rodion Alimov and Alina Davletova served up the highlight of the opening day of the YONEX-SUNRISE Hong Kong Open 2019 with their upset of Tan Kian Meng and Lai Pei Jing.

The Russians saw two of their match points saved but converted on the third opportunity to progress into the second round, 21-19 17-21 21-19.

On an adjacent court, Canada’s Joshua Hurlburt-Yu and Josephine Wu nearly scored an identical upset over Japan’s Kohei Gondo/Ayane Kurihara. The Canadians clawed back from an 8-16 deficit to make it 19-all, with Gondo making several nervous errors. However, Kurihara pounced on a weak serve by Josephine Wu to earn match point, and then she conjured an unreturnable net shot to save the day for the Japanese.

“The last time we played them, we got beat pretty bad, so we tried to improve since then,” said Hurlburt-Yu. “This game was much closer because we improved as a team, we tried to apply more pressure and think more on court. We played well, but we could’ve played better. It’s our first year travelling together, so we’re working out how to play in these kind of venues against these top pairs.”

Chris Adcock and Gabrielle Adcock overcame two match points to get the better of Lu Kai and Chen Lu in their opening encounter.

The Hong Kong Open is the final top-tier tournament of this year’s HSBC BWF World Tour, with the exception of the HSBC BWF World Tour Finals in December. Despite the prominent withdrawals, draws in all categories will be extremely competitive.

In men’s singles, seventh seed Viktor Axelsen will be looking for his first title since his comeback from injury, while second seed Chou Tien Chen will hope to go all the way in Hong Kong after narrowly failing in the China Open final last Sunday.