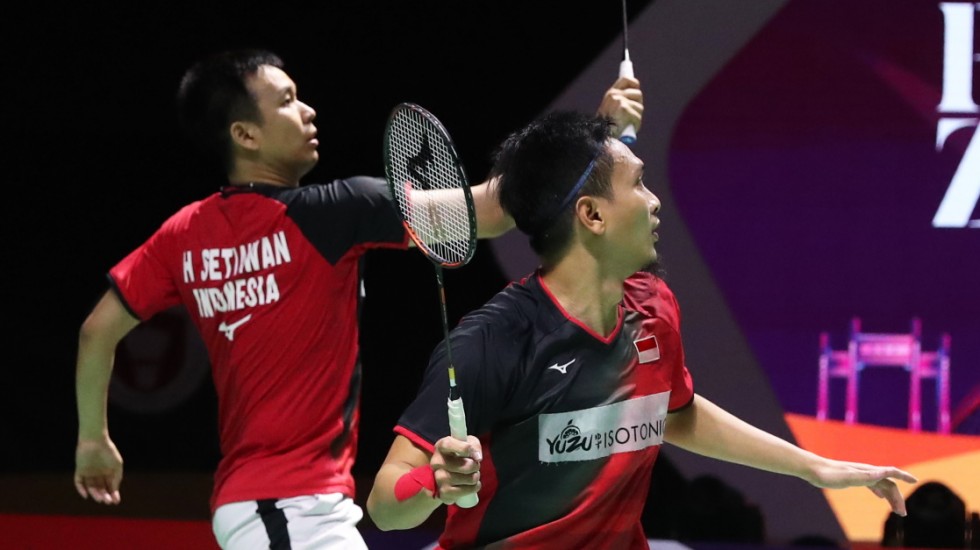 Mohammad Ahsan and Hendra Setiawan had a hard-fought win.

World champions Mohammad Ahsan and Hendra Setiawan overcame a difficult opening challenge to progress to the second round of the Fuzhou China Open 2019 today.

The Indonesians were involved in a cracker of a match against Chinese Taipei’s Lee Yang/Wang Chi-Lin, who fought every inch of the way in the first two games and saved two match points before eventually going down 27-25 22-24 21-17 in 56 minutes.

Ahsan and Setiawan next face China’s Ou Xuan Yi and veteran Zhang Nan in the second round.

Women’s singles second seed Akane Yamaguchi’s recent troubles continued, as she crashed out of the first round for the fourth time in the last five tournaments. Yamaguchi battled hard against Malaysia’s Soniia Cheah in the opening game but then faded away in the second, 21-19 21-16.

Another seeded casualty was Saina Nehwal; the eighth-seeded Indian going down to China’s Cai Yan Yan in just 24 minutes, 21-9 21-12.

“We under-performed. It’s very disappointing and far from our expectations,” said Polii. “We will have to make an effort to improve ourselves, we’ll see in the next three months. Hopefully we can overcome our situation.”