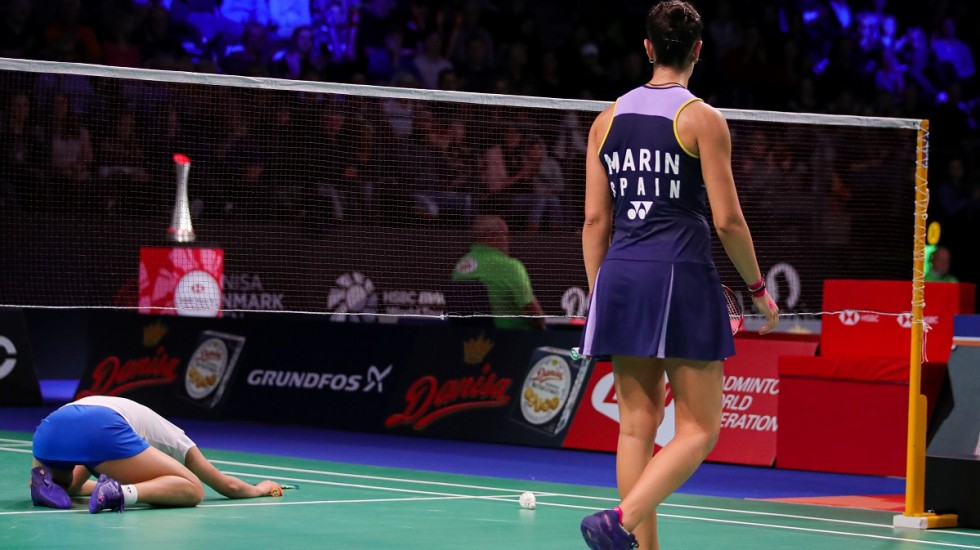 The prodigy and the champion. An Se Young and Carolina Marin gave it their all today.

Korea had five women’s representatives in action across the opening two matches on each of the three courts on Friday of the DANISA Denmark Open 2019.

And at one stage it looked like they would four of the five.

Teenage sensation An Se Young came within an inch of knocking off another big name in women’s singles, going down 21-18 21-19 21-18 to Olympic champion Carolina Marin.

Highlights | Olympic champion Carolina Marin 🇪🇸 is pushed to her limits by 17-year-old An Se Young 🇰🇷 but comes out on top in a three-game thriller🏸#HSBCBWFbadminton #HSBCRaceToGuangzhou pic.twitter.com/vIUM6Ehd6I

Marin had to call on every facet of her play to dent the attack of Young as the rapid speed of the shuttle made for a fascinating contest.

Marin said after: “I knew it was going to be very tough. She is very young at 17-years-old and has a very good future ahead of her. She is playing well at the moment and beat Tai Tzu Ying at the Sudirman Cup and [Pusarla V] Sindhu yesterday.

“Today it was really important to control the shuttle because it was very fast.

“She has a really good attack and she controlled the shuttle from the middle to the net quite well.

“I had to keep the shuttle down and not get caught in the middle.

“Overall it is a big improvement [from Tuesday and Thursday]. I just wanted to remain calm throughout and I’m really happy with how I played.”

At the same time, Lee So Hee and Shin Seung Chan were engaged in an enthralling battle with world champions Mayu Matsumoto and Wakana Nagahara. The Koreans took the first 21-18, lost the second 13-21, but then had four match points in the third to seal the upset.

However, Matsumoto and Nagahara are not world champions without reason, and they upped the momentum to pin the Koreans on midcourt to take six consecutive points to secure the win.

Korea, in fact, had four women’s doubles pairings in the quarterfinals.

Four-time title winners this year Kim So Yeong and Kong Hee Yong locked horns with second seeds Yuki Fukushima and Sayaka Hirota. It was a tense fight until the end after the first two games were split.

In the end, only Baek Ha Na and Jung Kyung Eun won through the to the semis. They defeated Thailand’s Puttita Supajirakul/Sapsiree Taerattanachai 21-13 21-16.