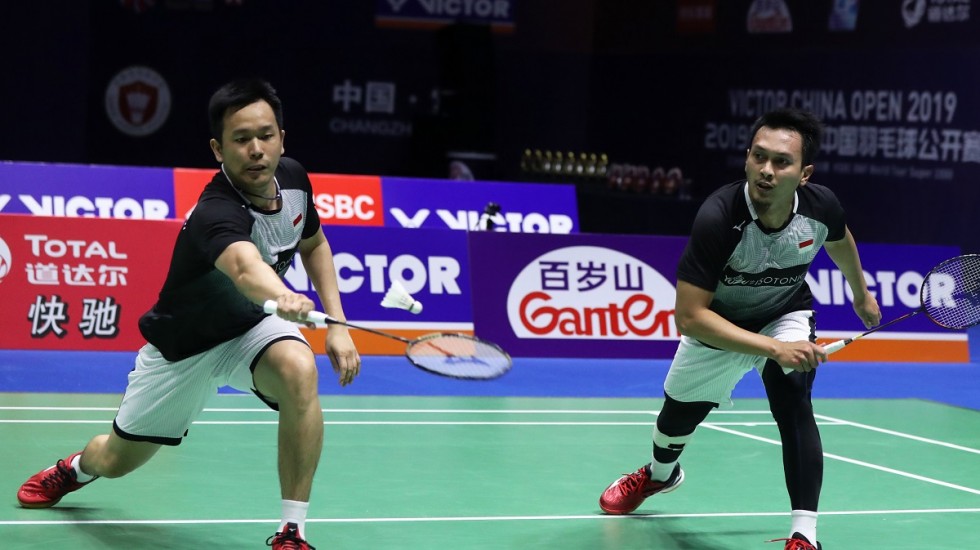 Can the Daddies finally get a win over the Minions tomorrow?

World champions Mohammad Ahsan and Hendra Setiawan have clearly avoided any post-Basel hangover progressing to their seventh final of the year and fourth from the past five tournaments they have entered.

In fact, if their performance against world No.3 Li Jun Hui and Liu Yu Chen on at the VICTOR China Open 2019 on Saturday is anything to go by, they are getting strong and stronger.

It was a tough first game with Li and Liu having an ideal opportunity to close it out at 20-17 up, but Ahsan and Setiawan turned the screw – and the speed of the play – to win five consecutive points to steal it 22-20.

That was a dagger in the heart to the chances of the Chinese as the second game flashed by in just 12 minutes, 21-11.

The only blot on the CV of the ‘Daddies’ this year – which includes victories at the All England Open and the World Championships – is their efforts against compatriots Marcus Fernaldi Gideon and Kevin Sanjaya Sukamuljo, whom they will face again in tomorrow’s final.

Interestingly, the losing streak against them extends even further – winless in their last seven dating back to February 2018.

A win in Changzhou will go part way to earning some redemption for their early exit at the World Championships last month.