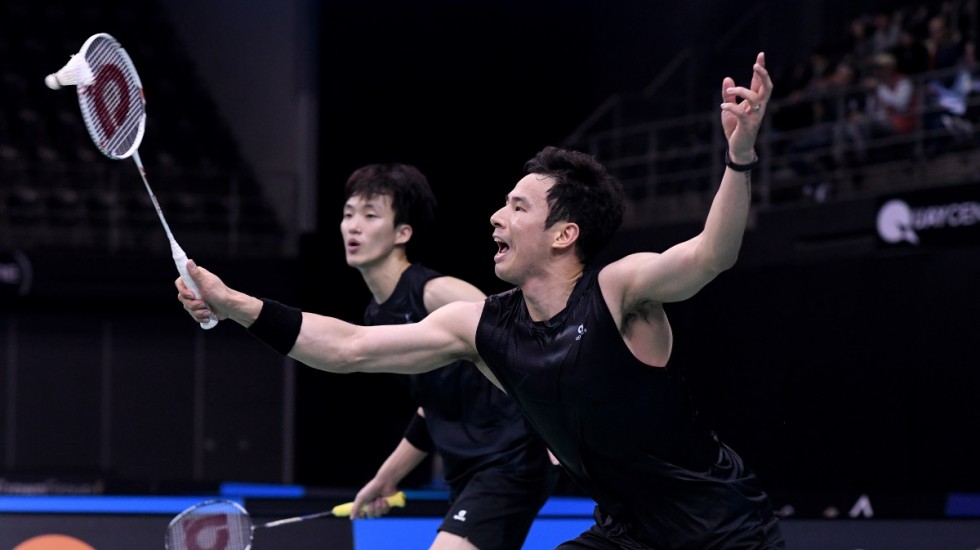 Ko Sung Hyun (right) and Shin Baek Cheol - back to their best.

Ko Sung Hyun and Shin Baek Cheol’s title win at the Crown Group Australian Open 2019 on Sunday signals the return to form of one a potent pair in men’s doubles.

Not since March 2016 – when they captured the New Zealand Open beating several top pairs, including Marcus Fernaldi Gideon/Kevin Sanjaya Sukamuljo and Angga Pratama/Ricky Karanda Suwardi – have Ko and Shin won an event of this level.

The 2014 world champions, who were out of action for over a year after mid-2016, enjoyed an electrifying week in Sydney. They toppled the Asian champions, Hiroyuki Endo/Yuta Watanabe, in the opening round; Berry Angriawan/Hardianto Hardianto in the second, and All England champions Mohammad Ahsan/Hendra Setiawan in the quarterfinals.

In the semifinals they faced world champion Li Junhui/Liu Yuchen, who only a few days previously had helped China win the Sudirman Cup. The Koreans held firm in the face of the Chinese’s big attacking game to come away victors in three games.

The final, against Takeshi Kamura/Keigo Sonoda, was one-sided, with the Japanese unable to contain the rampaging Koreans. The victory came in just 36 minutes: 21-11 21-17 to Ko and Shin.

“We feel especially good because we have beaten the top seeds,” said Shin. “Before this match, we trained a lot to get prepared.

“Our goal is to compete at the Tokyo 2020 Olympic Games. If we can continuously have success like today, I am sure we can qualify. We are planning to train hard and we want to have a good performance there.”

Ko and Shin’s Australian Open victory will enthuse followers of the game as it heralds the return of a pair of high pedigree. The retirement of several pairs in the aftermath of Rio 2016 did leave a vacuum, which was only partly filled by younger pairs like Gideon/Sukamuljo, Kamura/Sonoda, Li Junhui/Liu Yuchen and others.

Now, with Ko and Shin finding their way back to the top, and with compatriots Lee Yong Dae and Yoo Yeon Seong teaming up once more, men’s doubles might witness another exciting phase. Can the younger generation hold off the returning pros? Or will the experience of the seniors help them stonewall the energy of younger opponents? After all, Mohammad Ahsan and Hendra Setiawan did prove at the All England that the veterans can still turn on the class. Ko and Shin’s campaign in the run-up to Tokyo will be closely watched.