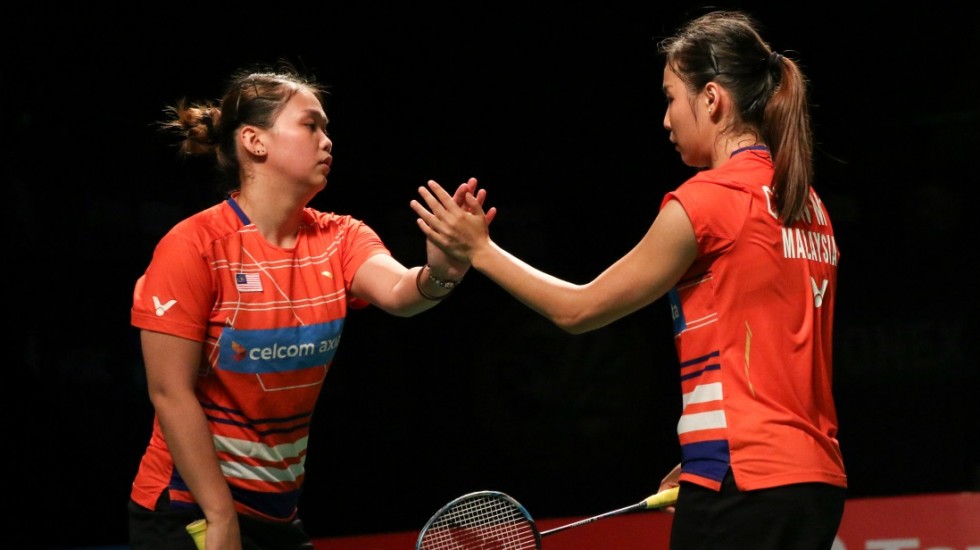 Chow Mei Kuan (right) and Lee Meng Yean are one win away from their biggest title.

their career’s biggest title as they made the final of the Yonex-Sunrise India Open 2019 today.

The Malaysian women’s doubles duo had never previously been in the final of tournament of this level (Chow had won the Commonwealth Games gold with a different partner, Vivian Hoo). Today the third seeds kept their nerve in a thrilling 73-minute encounter against Thailand’s Jongkolphan Kititharakul/Rawinda Prajongjai, 18-21 21-19 21-19.

Chinese Taipei’s Lee Yang and Wang Chi-Lin made their third straight final in men’s doubles as they upset top seeds Kim Astrup/Anders Skaarup Rasmussen (Denmark) 21-12 21-18. Lee/Wang, runners-up at the Swiss Open and winners at the Orleans Masters, are in contention for their biggest victory as a pair.

“It is not easy but we are happy to win today. It is our first Super 500 final,” said Wang. “We were relaxed and did our best. He told me not to think too much and just focus on the game. We just want to keep our minds calm and relax and enjoy the match tomorrow.”

Tide turns in favour of Chow/Lee after coming from behind to win game two in stunning style 💪💪🇲🇾 #HSBCBWFbadminton #HSBCRaceToGuangzhou pic.twitter.com/FHMQ4xDqlr

The Malaysians pulled off a victory from the jaws of defeat. Having lost the first game and trailing 14-19, Chow and Lee stunned the Thais with a seven-point sequence that gave them the second game.

Things were neck-and-neck in the third, until the Malaysians dashed ahead from 18-all to take three of the next four points.

Kidambi trailed in the decider before overhauling his opponent from 16-18 down.

“We have played them five times and we have won and lost as well. Recently, we lost to them in Indonesia. We were leading and in the second game we missed out and lost the game. This time we got back the focus and our strategy and communication helped us,” said Chow Mei Kuan.