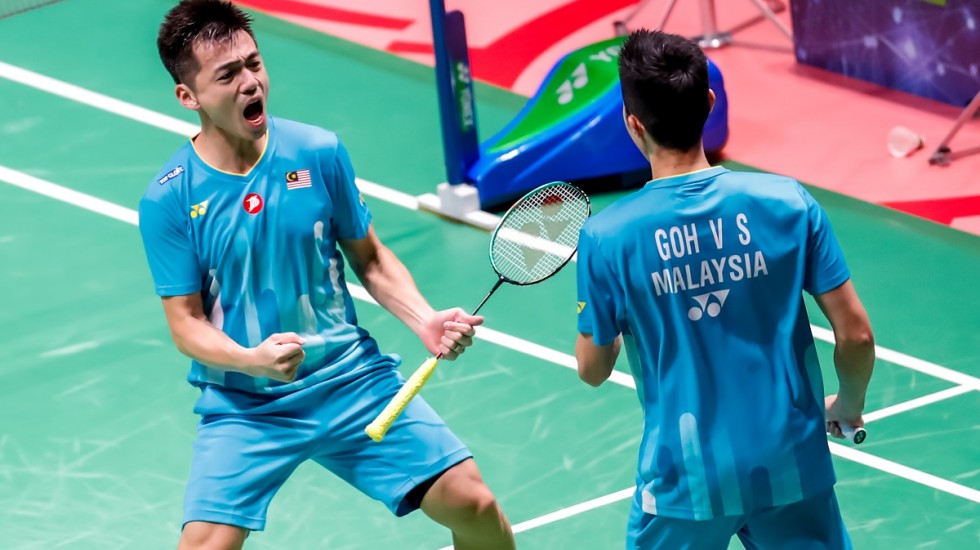 Rio 2016 Olympic silver medallists Goh V Shem and Tan Wee Kiong (Malaysia) regained some of the form that saw them reach number one in the world in knocking out last week’s Yonex German Open victors Hiroyuki Endo/Yuta Watanabe in straight games on Thursday.

It followed the surprise victory of World No. 28 ranked Germans Mark Lamsfuss and Marvin Seidel against China’s He Jiting and Tan Qiang – conquerers of No. 2 seeds and current world champions Li Junhui and Liu Yuchen in round one.

He Jiting and Tan Qiang took a substantial lead in the first game advancing 11-3 ahead, but the Germans rode the wave of pressure to first equal the encounter at 15-15 and then go onto secure the game 22-20.

They then built upon that momentum in the second game to win 21-14 and seal a quarterfinal spot against sixth seeds Mohammad Ahsan/Hendra Setiawan who were too strong for Russian pair Vladimir Ivanov/Ivan Sozonov 21-19 21-18.

Seidel said: “It was very difficult at 11-3 down but we were able to come back and right now we are really happy.”

Lamsfuss added: “We are so happy. It’s our first time qualifying for the All England and we want to go for more. There are a lot of great pairs but it would be amazing to win the tournament.”

The men’s doubles draw has now opened up considerably with the first, second and fourth seeds all knocked out following the losses of Marcus Fernaldi Gideon/Kevin Sanjaya Sukamuljo and Li and Liu yesterday. The Malaysians had a simple formula for dismantling the in-form Endo and Watanabe.

“We just kept focusing and chasing every single shuttle that we could. We stopped the errors and it helped us come back into the game.”

The Malaysians are now 3-0 against Endo and Watanabe.

“I’ve not felt very well from the start as I’ve been suffering from diarrhoea but I’m just going on with that. In the first game I felt like I was not able to move as I was feeling really heavy and sluggish.” – Saina Nehwal