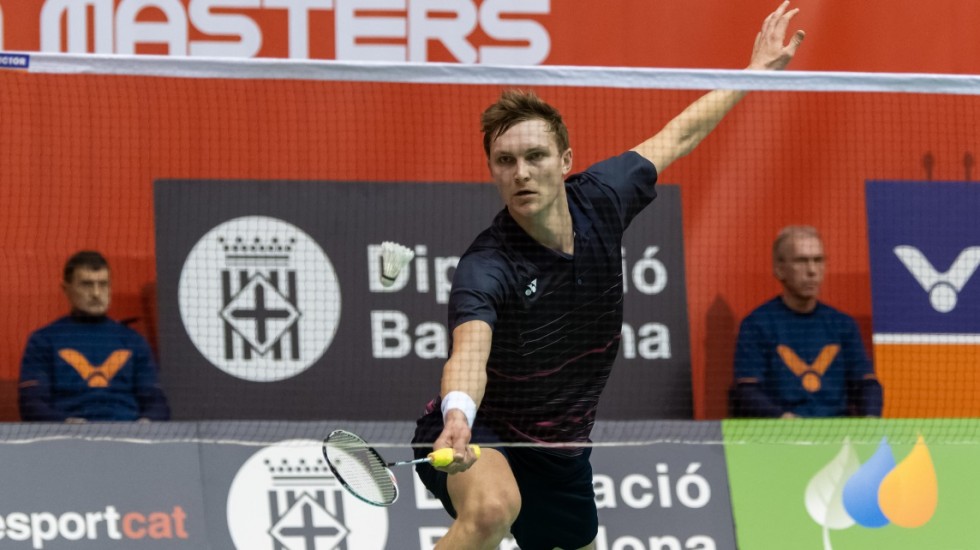 Denmark's Viktor Axelsen on his way to the Barcelona Spain Masters title.

Denmark’s Viktor Axelsen won a morale-boosting win over younger compatriot Anders Antonsen for his first HSBC BWF World Tour title in over a year, at the Barcelona Spain Masters yesterday.

It was also Axelsen’s first win in nearly two years against the fast-rising Antonsen, who won the Indonesia Masters last month beating world No.1 Kento Momota in the final.

In women’s singles, Axelsen’s compatriot Mia Blichfeldt won the biggest title of her career, beating another Dane, Line Kjaersfeldt, in straight games. Korea, like Denmark, finished with two titles, while Chinese Taipei were triumphant in the men’s doubles.

Yesterday, Axelsen was dominant from start to finish against Antonsen, wrapping up the victory in 48 minutes: 21-14 21-11.

Third seed Antonsen was stretched to three games by China’s Zhao Junpeng in his semifinal.

“I felt good on court, I played close to my highest level at the moment, which I’m pleased about,” said Axelsen. “It’s a while since I managed to play well in an important match like this, so I’m happy right now.

“I still feel I can up my game a bit during the next week. I came here still being in heavy training, so I have a week to rest and fine-tune some different things, and I hope I will be even better around ten days from now at the All England. It’s good to get some self-confidence. I’m more confident in my game in the fact that what I’m doing is working well.”

Blichfeldt, whose biggest victory till now was the Dutch Open (Super 100) last year, outplayed Kjaersfeldt 21-14 21-14. Blichfeldt dropped only one game on her way to the title, against China’s Cai Yanyan in the semifinals.

“I think I played a good match. I kept the focus and I played cool. I kept fighting for every point and it wasn’t pretty all the time but I just had to get the shuttle over. It’s a very good start to the year, and I didn’t play in January, so I was motivated to come here,” said Blichfeldt.

Lee and Wang, who were with different partners until late last year, got the better of seasoned Danish pairs Kim Astrup/Anders Skaarup Rasmussen and Mathias Boe/Carsten Mogensen in the quarterfinals and semifinals respectively.

The Koreans, who have partnered each other intermittently over the last three years, had a good start to this year reaching the Indonesia Masters final. They fought past Malaysia’s Chow Mei Kuan/Lee Meng Yean in the quarterfinals and top seeds Gabriela Stoeva/Stefani Stoeva, both in three games, before prevailing in the marathon final.

The mixed doubles title was also won by Korea, with Seo Seung Jae/Chae Yujung holding off Chinese Taipei’s Wang Chi-Lin/Cheng Chi Ya 21-18 21-15 in the first match of finals day.

The Koreans had to work hard through the week, with their last two matches before the final – against Indonesia’s Rinov Rivaldy/Pitha Haningtyas Mentari and England’s Marcus Ellis/Lauren Smith – going the distance.