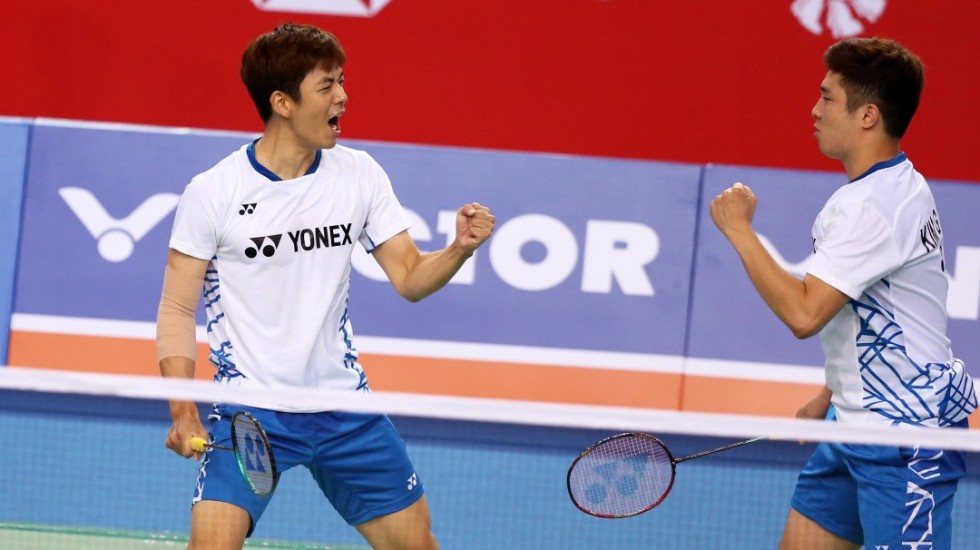 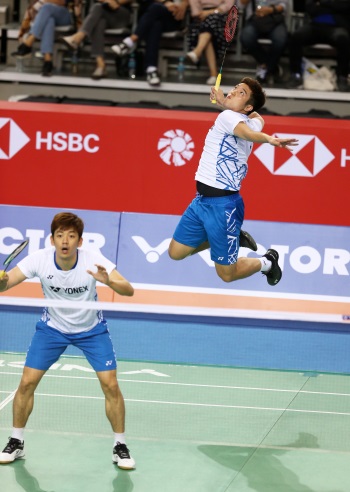 with a straight-games victory today in the Men’s Doubles opening round.

The Koreans (featured image), who were with different partners until late 2016 after which they were rarely seen in international events, played their first tournament of the year only last month. They arrived in Korea having won the Barcelona Spain Masters, but had a potentially difficult opening round against Vladimir Ivanov and Ivan Sozonov – the Russian pair that had beaten Lee Yong Dae and his then-partner Yoo Yeon Seong in two major events: the All England and the Rio Olympics.

The Koreans showed little sign that they have been off the circuit for long, as they overcame Ivanov and Sozonov 22-20 21-16.

“We didn’t really think about the times Ivanov and Sozonov beat us. We did lose to them twice but we have played so many matches and won so many,” said Lee. “The important thing is the way we played today and Gi Jung did really well at the net.  It was a difficult match to play but all we can do is focus on playing well ourselves.

“We haven’t played here in a couple of years and we were a little nervous at first but it was only our first match and we managed to get it together and win it in the end so I think we can prepare well for our next match and I am not too worried about the troubles we had today.

“We had a good tournament at the Spain Masters too but this is very different because the event is being played in our country, at home, and there are lots of our compatriots who have come to cheer for us. We were actually surprised by how many there were out to see the first round. We thought, ‘Well, we can’t lose this one!’” 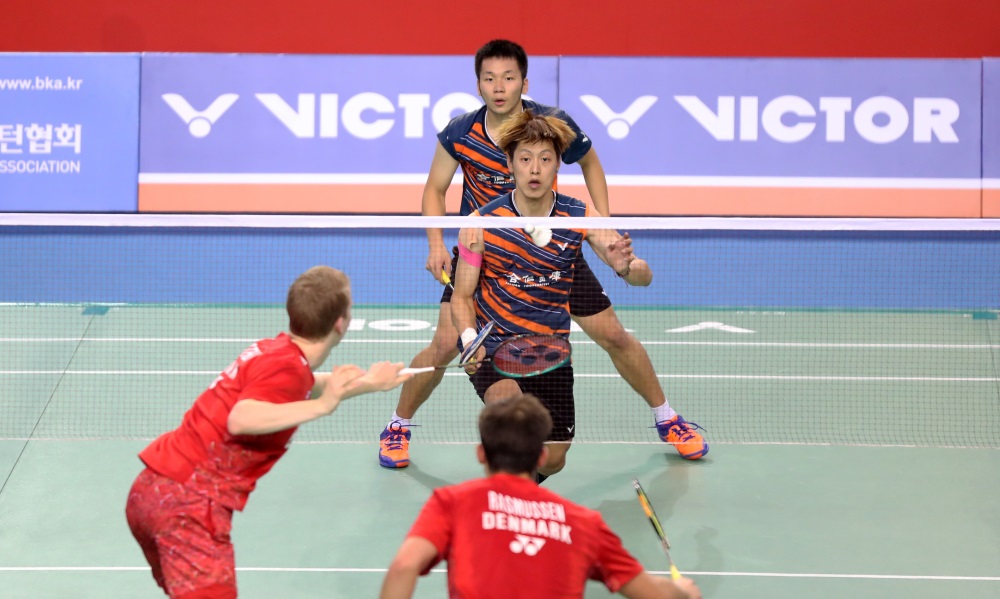 Kim Gi Jung said playing alongside Lee at the Korea Open was a novel experience: “I’ve played on the same team as Yong Dae for many years but this is the first time I’m playing with him in such a big tournament. I’m trying to work on the areas where I am lacking so that we can do well here.”

The Korean duo will get a chance to test themselves against some pairs who have shot up in the time that Lee and Kim have spent away from the sport. Tomorrow they take on World Championships runners-up and top seeds Takeshi Kamura/Keigo Sonoda (Japan), who tamed last week’s China Open runners-up Han Chengkai/Zhou Haodong (China) 21-15 21-14.

Another surprise was the defeat of third seeds Mads Conrad-Petersen/Mads Pieler Kolding at the hands of Thailand’s Kedren Kittinupong/Dechapol Puavaranukroh, 21-15 21-19. 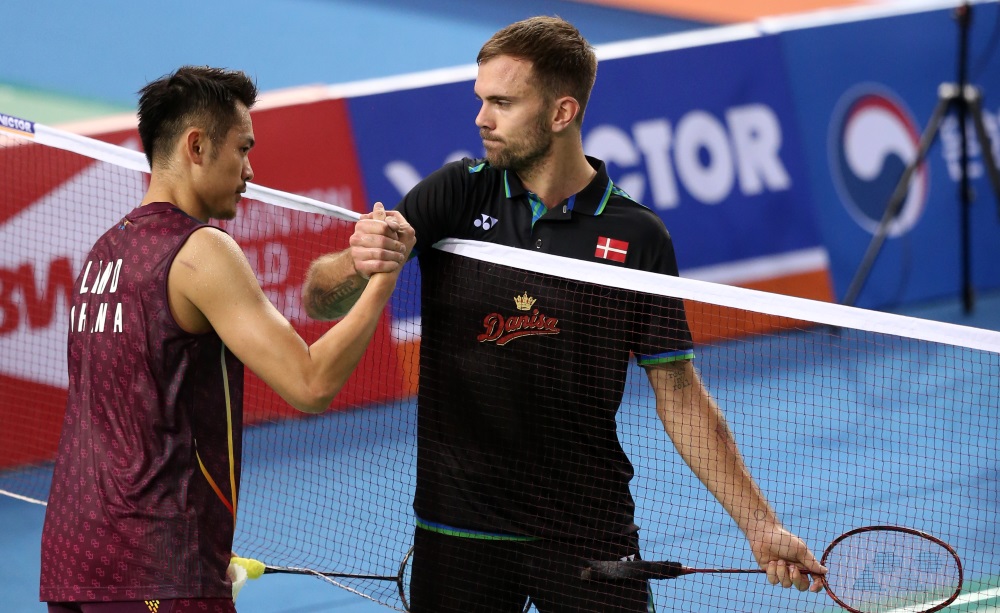 China Open Men’s Singles champion Anthony Ginting (Indonesia) had things under control in getting past his first round opponent Lucas Corvee (France), 21-18 21-10. Next up for him will be Chinese Taipei’s Wang Tzu Wei. 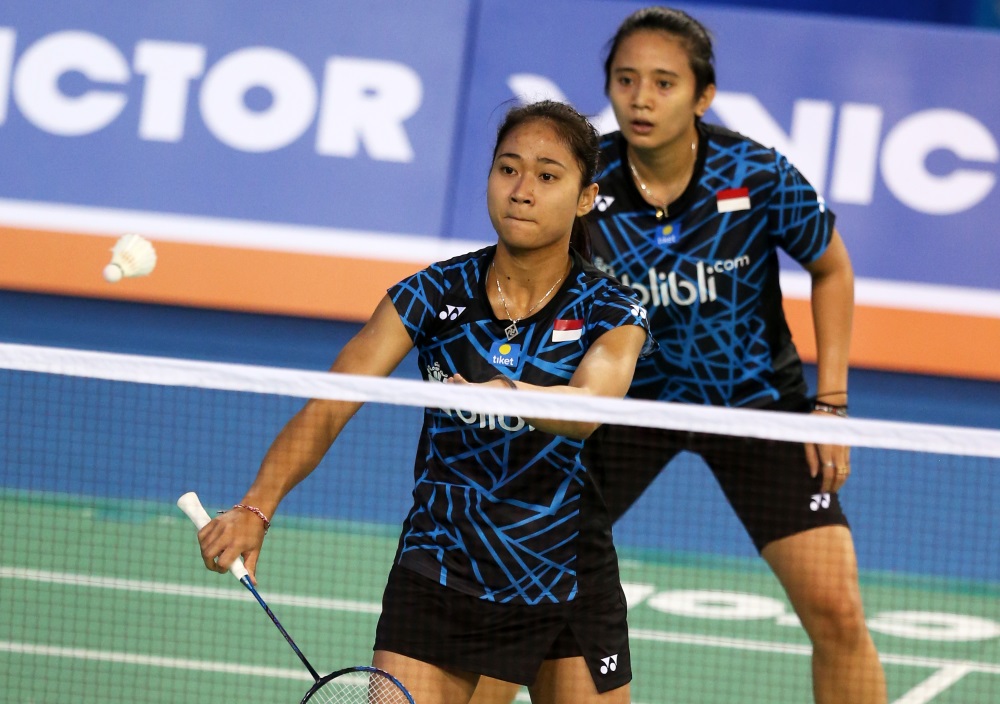 In Women’s Singles, an interesting clash played out between former Olympic champion Li Xuerui and the player who has often been compared to her in terms of looks and playing style – Gao Fangjie. The senior player eked out a second game win but the physical effort proved to be too great for her as Gao powered through 21-18 21-23 21-8.