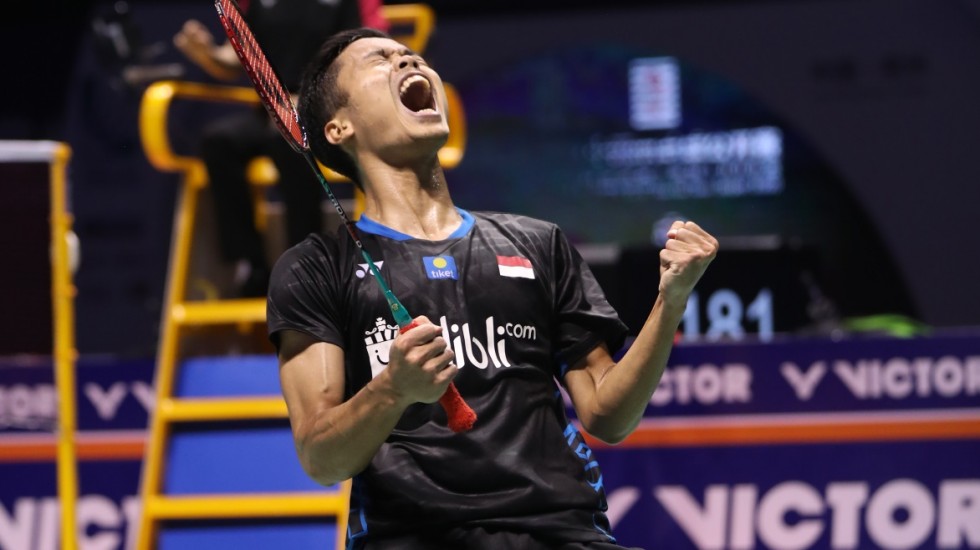 fourth World champion this week for the biggest victory of his career. 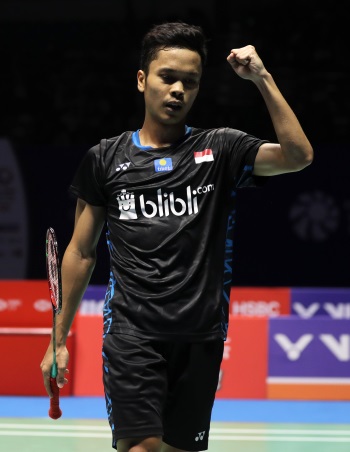 The Indonesian’s victory was the biggest surprise of finals day, as the other four matches went according to seeding, with titles evenly distributed among five countries. Among the victors were Denmark’s Men’s Doubles duo Kim Astrup/Anders Skaarup Rasmussen, who accomplished their career’s biggest feat with a first title of this level.

Ginting’s victory was all the more remarkable for he had, in succession, beaten the last three World champions in the run-up to today’s Men’s Singles final – Lin Dan in the first round, Viktor Axelsen in the second and Chen Long in the quarter-finals. Against reigning World champion Kento Momota, however, Ginting was seen as the underdog – for Momota has been nearly unbeatable in finals, having lost just one of his last eleven. Not even the fact that Ginting beat Momota at the Asian Games weighed heavily in his favour – such has been the aura around Momota’s exploits.

And yet the unheralded Ginting came up with something special on the day, edging Momota 23-21 21-19 after an absorbing hour-long clash.

Momota did little wrong. For most of the match he was as well-balanced, as poised as against many of the opponents he has vanquished. Neither did he falter in his control of the shuttle from either end.

In fact, in both games the Japanese had exerted his dominance, establishing big leads with the end in sight. Yet the Indonesian refused to buckle. It was his stubbornness while on slippery ground that Momota couldn’t quite overcome.

Ginting was down 14-19 in the opening game and 10-15 in the second. In both games, with the Japanese on the ascendant, the Indonesian was electric in movement and unflappable in defence; at the first hint of an opening he was unafraid to pounce and nail pinpoint winners. It was one such smash that gave him match point. Finally, after a dramatic week that has seen him overcome one reputed opponent after another, he had the title on a soft shot, a shuttle that landed gently on the line. It was his first significant title triumph since winning the Indonesia Masters in January. 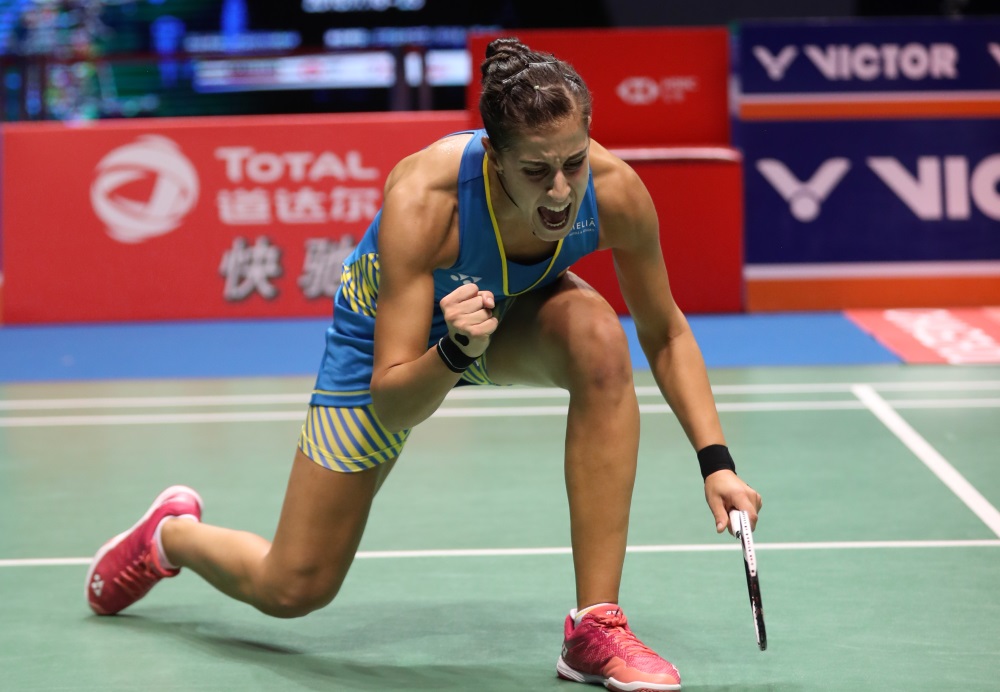 “Thankful to god that I could win,” said Ginting. “The match was tight and the margin was thin. I just tried to do what I did in previous matches when I was trailing.

“I just kept my focus, aiming to get the next point. The drift was a problem and I had to readjust in the second game. I kept the pressure on him with my attack whenever possible.”

There was to be no upset of the World champion in Women’s Singles, as Carolina Marin stormed to her second title in two weeks. Marin had too many weapons in her arsenal for local hope Chen Yufei to handle as she clinched the match 21-18 21-13.

The Chinese will look back and rue phases of indecisive play that gave Marin the space she needed to stamp her dominance. Chen had a strong start, going up 12-5, but once the Spaniard started getting her range of attacking shots on target, Chen was reduced to fending off the attacks and struggled to regain the initiative. 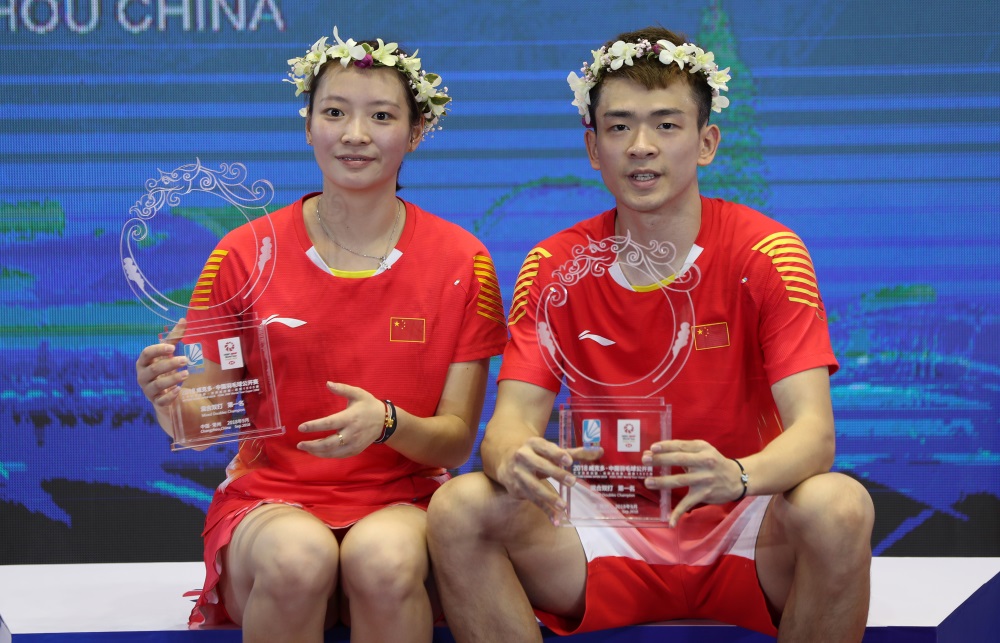 For a brief while in the second game Chen stood her ground, but again the pattern repeated. Faced with an opponent who played at a fiery pace while maintaining laser-like precision, Chen could ill afford to falter on the quality of her shots. She wasn’t up to the task today, and Marin simply bulldozed her to take 12 points in a row for her third major title this year.

“My performance here was not 100 percent, but I’m am happy that I played ten matches in two weeks and won both titles,” said Marin. “Today was tough because she was playing really well in the beginning of both games, and with the home crowd supporting her, she was more confident. I tried to keep my focus, tried to keep going and just enjoy the game. I kept pushing her, I wanted to show that I want to win here.”

Misaki Matsutomo and Ayaka Takahashi had a surprisingly quick 21-16 21-12 victory in the Women’s Doubles final over compatriots and World champions Mayu Matsumoto and Wakana Nagahara. It was the first title victory for the Olympic champions since the Malaysia Open in June, and, just as significantly perhaps, it was an important statement from the senior pair who have had to contend with younger compatriots staking their claim as the best in their country. 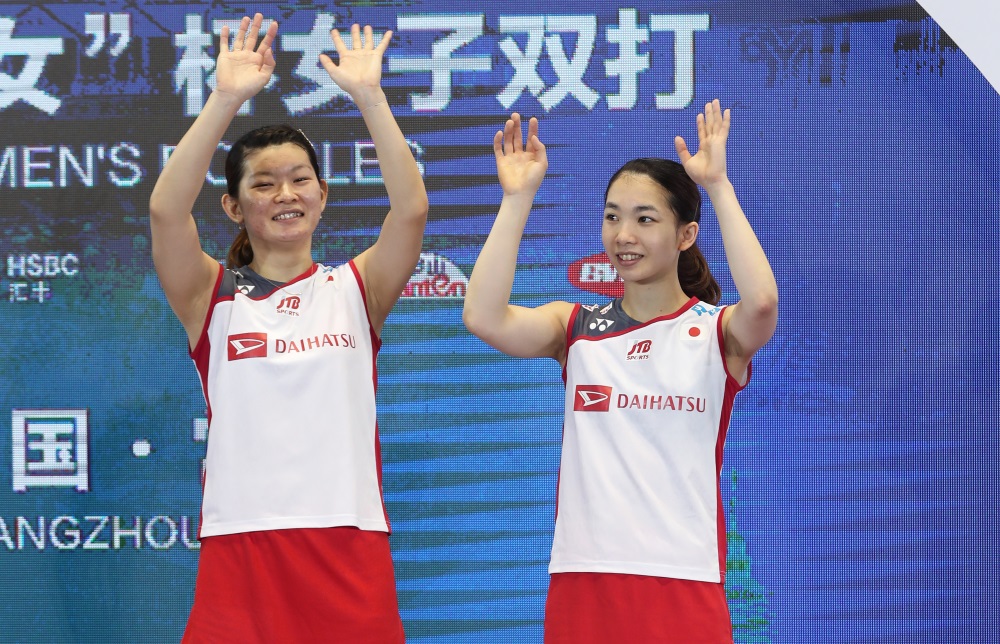 The Mixed Doubles saw China’s Zheng Siwei and Huang Yaqiong claim their sixth title of the year – their fourth in succession – with a 21-16 21-9 hammering of compatriots Zhang Nan and Li Yinhui. It was their ninth title since coming together as a pair in November 2017.

“I’m very happy of course. We are a bit tired after these four tournaments. We need to recuperate now. We need to stay balanced and try to improve. We didn’t think about winning four tournaments in a row, we were just focussed on one tournament at a time,” said Zheng Siwei.

Denmark’s Astrup and Rasmussen outplayed young Chinese Han Chengkai and Zhou Haodong, who were in their first major final, 21-13 17-21 21-14. The Danes, aware of the big-hitting capabilities of their opponents, kept things tight in the third game. Their only moments of worry were when Han and Zhou ran up a sequence of points from 7-15 to 12-15, but they had too much experience to fritter away the advantage and they duly closed it out on the 52nd minute. Rasmussen, apparently too dazed by the win, ran around in circles on the court to celebrate. 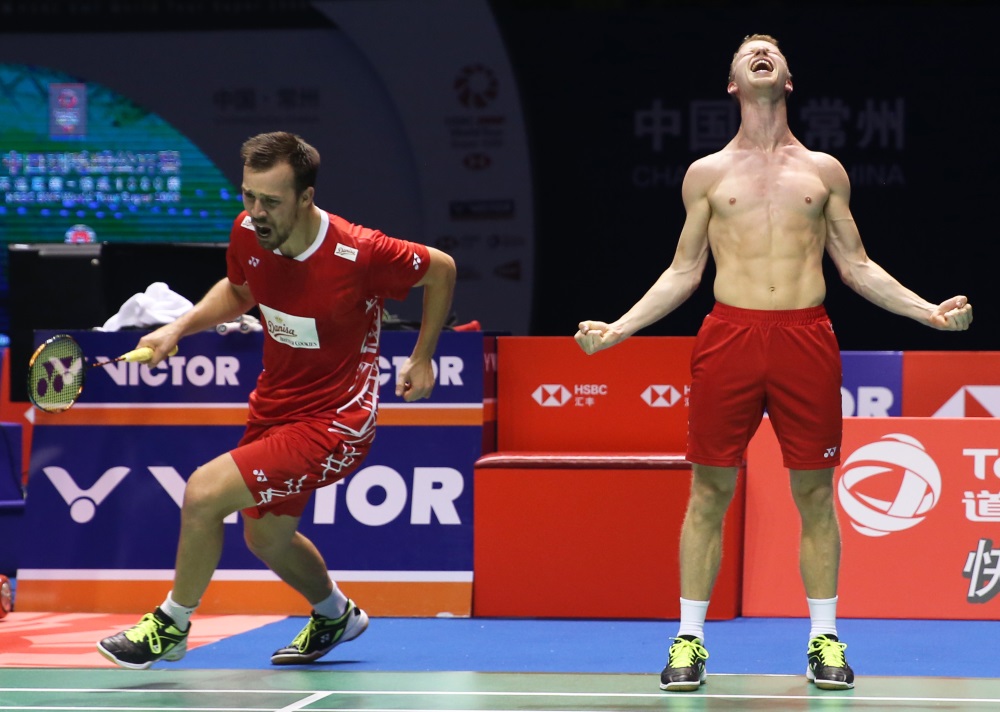 “Both of us are quite surprised,” said Rasmussen. “It sounds like a cliché, but we’re surprised that we won the China Open because it is one of the biggest tournaments. We came as the eighth seeds, and we beat pairs that we’d lost to before. And we’ve never been in such a big final before.”

“I’m a bit speechless,” added his partner Astrup. “There were nerves today, it was stressful. You could tell it was their first big final. But we manged to stay almost cool. I’m overwhelmed.”

Astrup also conveyed wishes to Men’s Singles World No.4 Lee Chong Wei, who is recovering from an illness: “I want to say our thoughts are with Lee Chong Wei and his family right now. We pray for him to recover.”