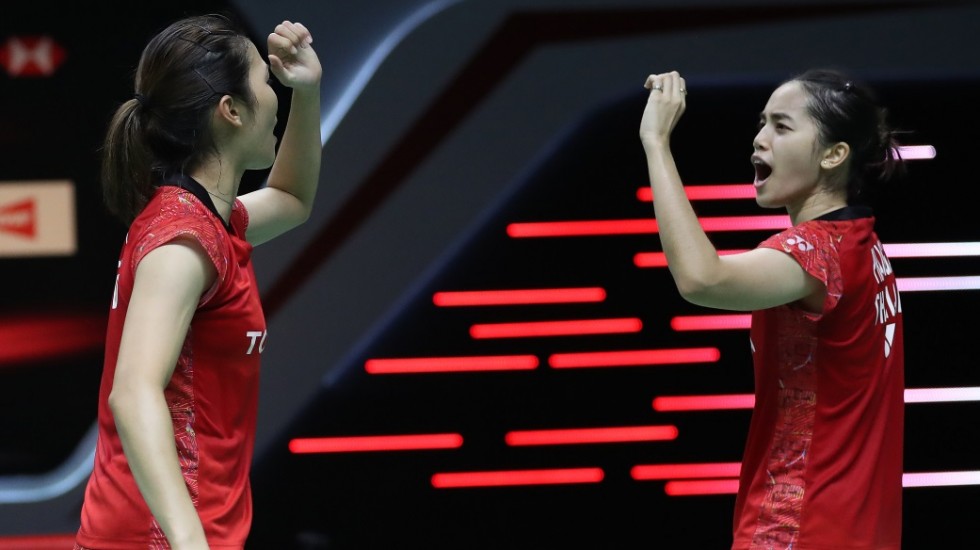 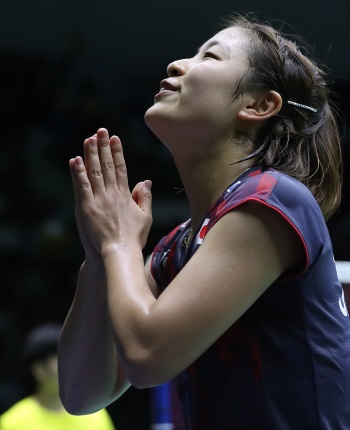 Japan’s Fukushima and Hirota had dominated the six previous encounters between the two Women’s Doubles pairs, winning five; the last two being quarter-finals at the Badminton Asia Championships and the All England. Pitted against the World No.2 pair once again in the quarter-finals, the Thais delivered a near-perfect performance to overcome the Japanese, 21-13 14-21 21-12.

The Thais (featured image), buoyed by an exuberant home crowd, shrugged off their second game loss to dominate proceedings in the third. Both Prajongjai and Kititharakul displayed great touch at the net and kept things tight, not allowing any leeway for the Japanese. Even while under pressure, the Thais surprised Fukushima and Hirota with the quality of their defence – on a couple of occasions getting the shuttle back from kneel-down positions. Fukushima and Hirota, untypically, looked at a loss for ideas and went down on the 67th minute. The Thais face another Japanese pair, Misaki Matsutomo and Ayaka Takahashi, who enjoyed a quick 21-11 21-10 result over compatriots Naoko Fukuman/Kurumi Yonao.

“Today was a high-level match and we played to our level. Earlier, I think we played much below ourselves,” said Kititharakul. “We’ve lost to them a few times, so we felt we had nothing to lose today. We won’t put any pressure on ourselves tomorrow. If we can win against this pair, we can beat any other pair in the world.” 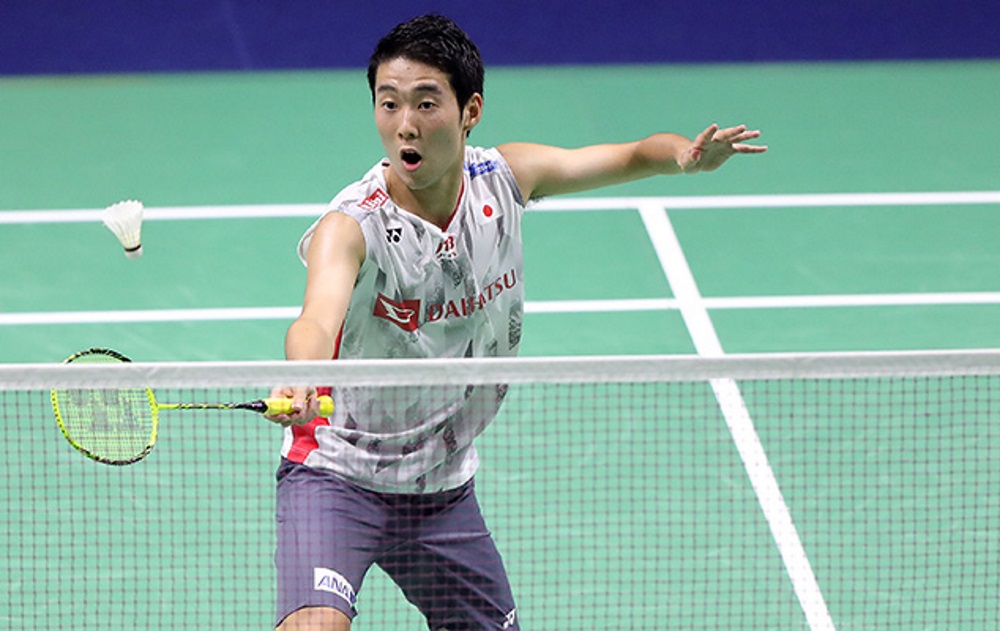 “I didn’t feel the pressure of playing at home,” Avihingsanon said. “I spent a lot of time watching his matches. The speed of the shuttle today suited my game well, and I think that discomfited him. I was able to break through his defence. I’m very proud of my performance. This is my first semi-final at an event of this level. I will be ready for my semi-final tomorrow.” 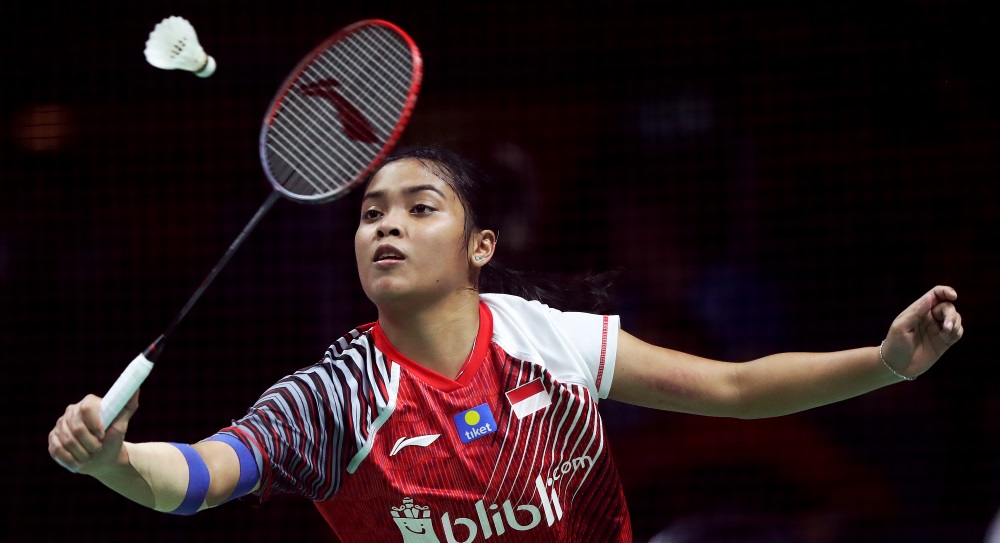 It was also a first World Tour semi-final for Indonesia’s Gregoria Mariska in the Women’s Singles, as the World Junior champion brushed aside a feverish Michelle Li (Canada), 21-17 21-8. Tunjung will be up against India’s Pusarla V Sindhu, 21-17 21-13 winner over Malaysia’s Soniia Cheah.

Both the quarter-finals in the top half were tightly contested. USA’s Beiwen Zhang won a roller-coaster of a match against top seed Akane Yamaguchi (Japan), while the other quarter-final, an all-Japanese clash between Nozomi Okuhara and Aya Ohori, swung Okuhara’s way at the very end.

Zhang built up big leads in the decider against a listless Yamaguchi, employing clever variations at the net and pushing Yamaguchi deep on her backhand. The tenacious Japanese however sprang back and caught up at 19, before a sharp backhand winner from Zhang caught Yamaguchi off-balance after a gripping rally. 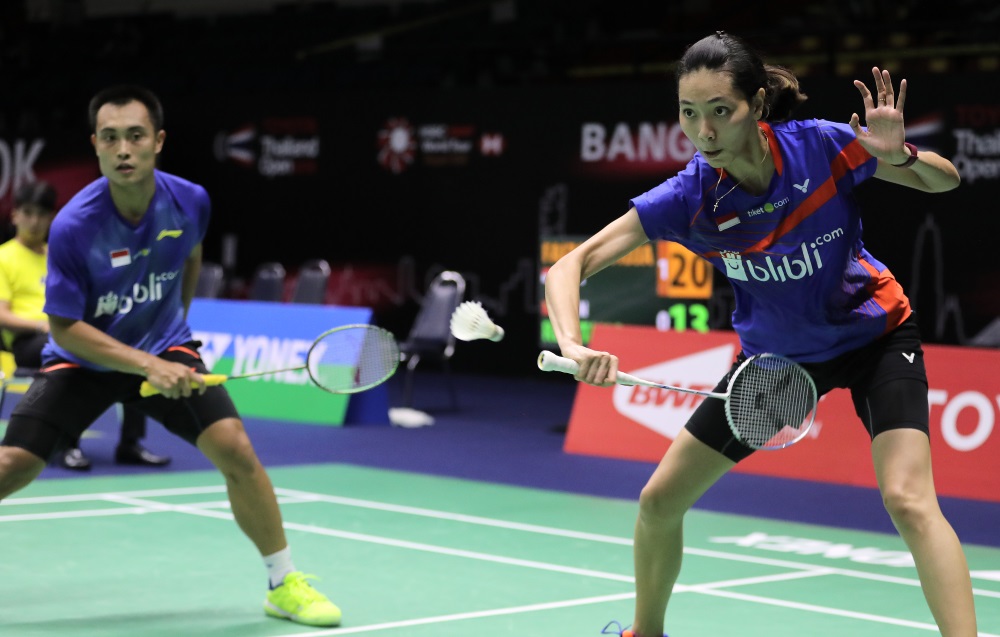 “There were very few rallies, but when we got into it, I was afraid to play it tight because the shuttle felt heavy and it was hard to change direction,” said Zhang. “I could control it better at the net as she’s short and maybe I had a better feeling than yesterday, and I was confident in playing the trick shots. Her body language was telling me she wasn’t patient. I tried not to think too much at the end. I will just try to maintain this level for tomorrow.”

Thailand had more reason to celebrate in the last match of the day as the once- estranged Men’s Doubles partners Bodin Isara and Maneepong Jongjit, in only their second event since getting back together after nearly six years, made the semi-finals beating Malaysia’s Aaron Chia/Soh Wooi Yik 21-11 11-21 21-13.