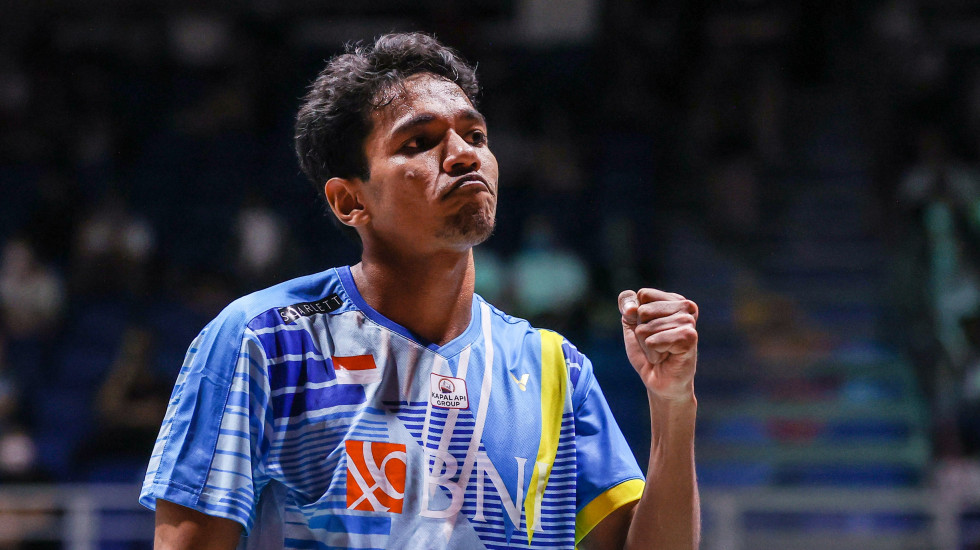 It was a quarterfinals day with some unexpected results, with three champions from last Sunday’s PETRONAS Malaysia Open crashing out. Gregoria Mariska Tunjung had set the tone early in the day with her upset of top seed Akane Yamaguchi, whose compatriots Yuta Watanabe/Arisa Higashino followed her out, falling to Thais Supak Jomkoh/Supissara Paewsampran.

Wardoyo has shot up this season, gaining attention with a semifinal performance at the Badminton Asia Championships where he beat Kento Momota, Lee Cheuk Yiu and Li Shi Feng. Today he was unflustered at losing the opening game and stayed composed to overcome Ginting 11-21 21-16 21-17.

“For the match today the main thing was to be mentally prepared. It wasn’t awkward as such to face my senior, as both of us are professional players.”

The recent uptick in his performances, he said, was a result of the work he’d put in during the pandemic months when there were few tournaments.

“I’ve started enjoying every match. As there were no events during the pandemic I had time to train. Once the season started I played in a lot of tournaments and gained experience, so perhaps that’s why I’m able to play at a good level now.”

Yuta Watanabe wasn’t his best, having suffered a fall in his last match, and Supak Jomkoh/Supissara Paewsampran grabbed the opportunity. With their more illustrious teammates Dechapol Puavaranukroh and Sapsiree Taerattanachai coaching them, the Thais overcame a second game loss to put it past the Japanese, 23-21 14-21 21-18.

“Today we could execute whatever we’d planned, and we were not concerned about winning or losing,” said Paewsampran. “The main thing was that we had to keep up our attack. They’re quite fast, and we had to avoid lifting the shuttle in the air. It helped having Sapsiree in the coach’s chair, she knows their game well!”