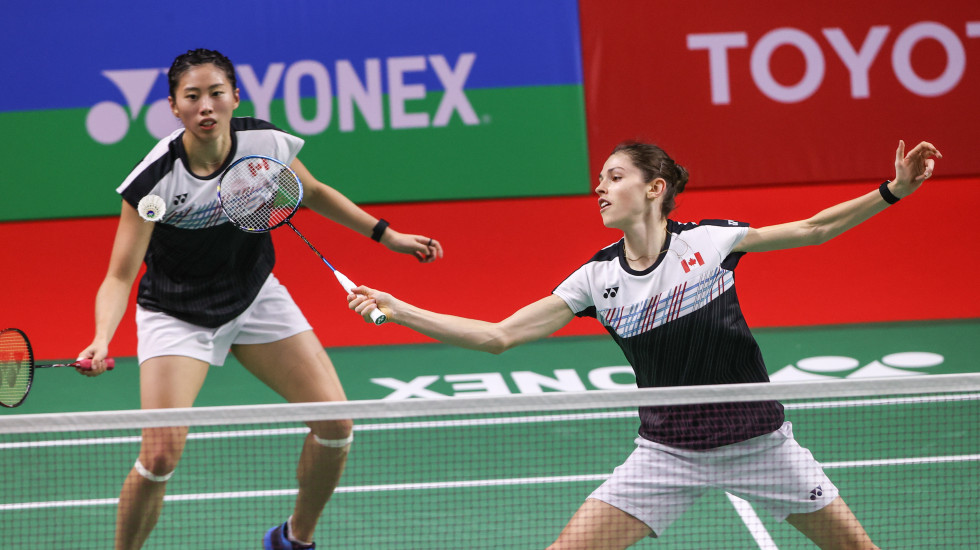 Rachel Honderich and Kristen Tsai live in the opposite ends of Canada – Tsai in Vancouver and Honderich in Toronto – so the world No.23 duo weren’t able to train most of last year. They only got together for a few weeks before the YONEX Thailand Open.

The Canadians made the most of the time away from competition as Tsai completed her Masters degree in criminology, while Honderich has been taking online classes in kinesiology.

“It was very tough in the beginning (with the lockdown), with the tournaments cancelled… We’re very grateful that Thailand has put so much into hosting these tournaments and we feel lucky to compete again,” said Honderich, after their first round loss to Greysia Polii and Apriyani Rahayu.

“It’s been ten months since the All England so we were a bit anxious. It’s a long time since we’ve been together, so a lot of nerves and a lot of excitement. It was refreshing to be back there. We saw each other last All England, and we went all the way to December without training together because we live in the opposite sides of Canada. So we only got together for a few weeks before coming here. So we trained hard but separately, so that hasn’t helped.

Ng Ka Long Angus has used the time during lockdown to improve his cooking skills. The Hong Kong China player said competing in the Asian Leg was a ‘precious’ chance to play.

“I really trained hard these last nine months and this is the first time I have stepped on court since March. I am treating these tournaments as a warm-up for the Olympics and many world-class players are here.

“I have learned to treasure my career because we have all wasted nine months and this is a very precious chance to play and I cherish it a lot. Other than badminton, the thing I have improved the most during COVID-19 has been my cooking skills. I like to cook traditional Chinese dishes for my family and when I travel I miss Chinese food a lot.”

“Finally, we are able to come back on court. We have been waiting for this for a very long time. And we are very thankful to Badminton Association of Thailand for organising this tournament very well. They made me feel very safe to play in this tournament.” — Vivian Hoo

“I feel really happy to be back on court after some months without tournaments. I have really missed it a lot. I wanted to get back this competition feeling, that adrenaline.

“I came with determination to win but also to keep my focus on my game plan. Winning here is what I want. I would like to win a title here. We can’t interact with the other players because of the strict bubbles when we practice and stuff, but it’s so nice to see the players from all the other countries.” — Carolina Marin

“We’ve felt like something has been missing with the disruption of tournaments, but we’re so glad to be back. We’ve been watching lots of action films in the room. It’s been fun.” — Mohammad Ahsan