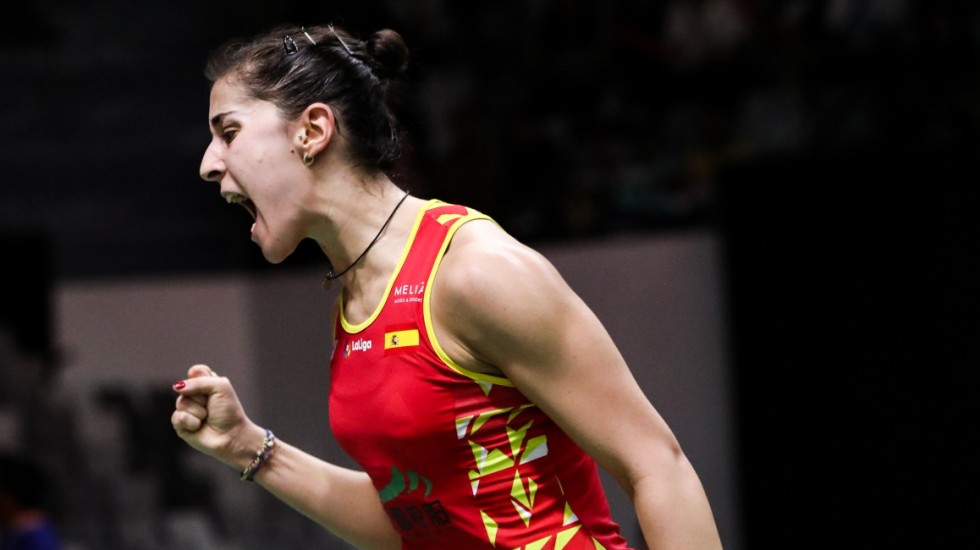 Carolina Marin's blitzkrieg was hard to handle for An Se Young.

Carolina Marin avenged her surprise French Open final loss to An Se Young, cutting apart the defences of the Korean teen in 46 minutes to make the semifinals of the DAIHATSU Indonesia Masters 2020.

The 21-17 21-6 victory saw her pay back An Se Young in her own coin as the Korean had demolished Marin 21-5 in the third game of the French Open final.

Yet, Marin denied that the French Open loss had anything to do with her determination to to win today, claiming that an injury had affected her during their last match.

“At the French Open, I had an injury, I had some pain in my glutes and I shouldn’t have played the third game, but you know sometimes you want to keep going on court,” Marin said.

“Today it was not about losing the last match, it was just about keeping my focus and to do my best here in Istora. I feel really good with the crowd and the support.”

It was an unusual match, especially for An Se Young who has quickly built a reputation. Marin was up 8-0 before An got her first point, but then the Korean started moving well and anticipating brilliantly, dragging Marin through some extended rallies. The Korean banked on a conservative style as she focussed on keeping the shuttle in play and not exploring angles or forcing the pace; even Marin’s sharp arrows from midcourt were parried comfortably.

It looked tricky for the Spaniard with An just a point behind at 17-18, but once she got the game in her bag, it turned into a rout – the Spaniard running away with it with leads of 9-0 and 14-2. An, whose steady game had helped her stay in the hunt, was caught off-balance with Marin varying her attack. The Korean was frequently on all fours as the shuttle zipped by left and right.

The nature of the demolition was perhaps a reality check for the 17-year-old, who has soared from one high to another over the past year.

As for Marin, the Spaniard is just a couple of wins away from making a triumphant return to the site of the most painful moment of her career. Within a year of a devastating ACL injury, the three-time world champion has shown the stuff she’s made up of.

“An Se Young is a tough player, she is young and talented, and I had to be careful in every point, every rally, and I just kept all my focus on my gameplan,” stated Marin. “I felt I didn’t give her any chance in the beginning of the match and the beginning of the second. I was really focussed with so much determination that I wanted to win today and that’s what I showed her.”