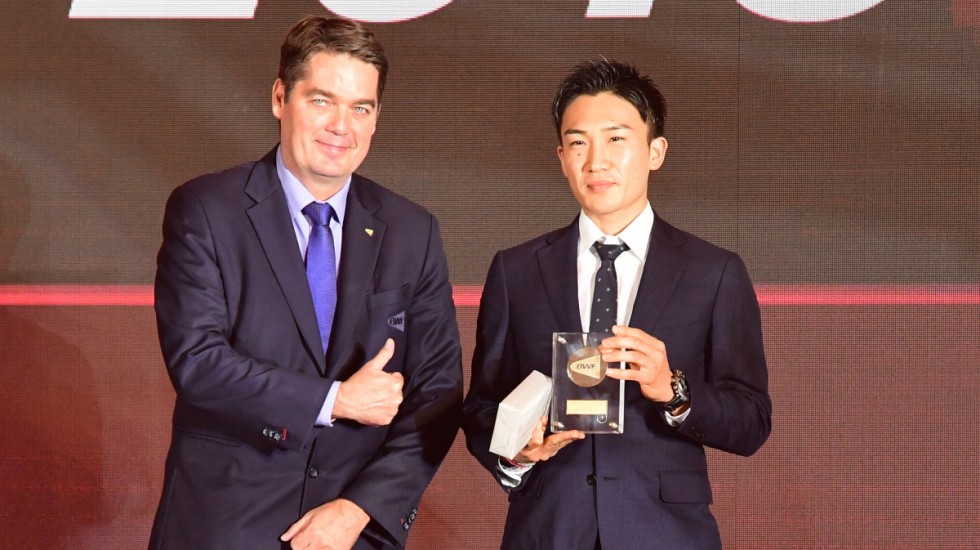 Momota, Huang are BWF Players of the Year

Kento Momota, winner of 10 titles this year including the TOTAL BWF World Championships, was honoured with the Male Player of the Year Award at the annual Players’ Gala before the HSBC BWF World Tour Finals in Guangzhou, China.

The Japanese had an outstanding season during which he won most of the major titles, including the World Championships, the Badminton Asia Championships, and the All England. He also guided Japan to the Sudirman Cup final.

“I’m very happy, this is precious,” said Momota. “My success is due to the support of many people. The award will give me great confidence. I would like to win it again and will work hard towards it.”

Huang Ya Qiong picked up the Female Player of the Year for the second consecutive year, holding off competition from Chen Qing Chen/Jia Yi Fan, Yuki Fukushima/Sayaka Hirota and Tai Tzu Ying.

Huang and partner Zheng Si Wei were nearly unstoppable most of the season; not only did they win the World Championships for the second time, but also all three Super 1000 titles – All England Open, Indonesia Open, China Open.

“I’m happy but at the same time surprised. I was nominated but I really didn’t expect to win this. Last year I was hoping to win this award. Since I won last year, I thought I wouldn’t win again, the award would probably go to another player. I think I played above expectation at the Sudirman Cup and the World Championships,” said Huang.

“I’m elated and excited because this is my first time winning this award. I hope I can win more awards in the future,” said Qu.

“I hope I can maintain my form. Next year badminton will be in the Paralympics for the first time, I hope I can play well in the first edition in Tokyo.”

Korean women’s doubles pair Kim So Yeong and Kong Hee Yong, who are in their first full season together, were voted Most Improved Player of the Year, ahead of fellow contenders Satwiksairaj Rankireddy/Chirag Shetty, Praveen Jordan/Melati Daeva Oktavianti, and Michelle Li.

Kim and Kong won four titles, including the Japan Open and the Korea Open.

“I’m happy with the good results we produced this year,” said Kim. “To win the award this year, before the Olympics, makes me even happier. This award was definitely unexpected, so to me it’s double the joy.”

Korea had more reason to cheer as 17-year-old women’s singles prodigy An Se Young was named Most Promising Player of the Year. An finished the year in the top 10 of the world rankings, with season highlights being title wins at the French Open, Korea Masters, Akita Masters, Canada Open, and New Zealand Open.

“As one of the nominees, I came here from Korea full of hope. To finally win this award, I’m extremely happy,” said An Se Young.

The other contenders for the Most Promising Player of the Year were Koki Watanabe, Leo Rolly Carnando/Daniel Marthin, and Kantaphon Wangchaoren.

Viktor Axelsen and Ratchanok Intanon won the awards for the Best Dressed players in the male and female category respectively.

Male Player of the Year

Female Player of the Year

Eddy Choong Most Promising Player of the Year

Most Improved Player of the Year