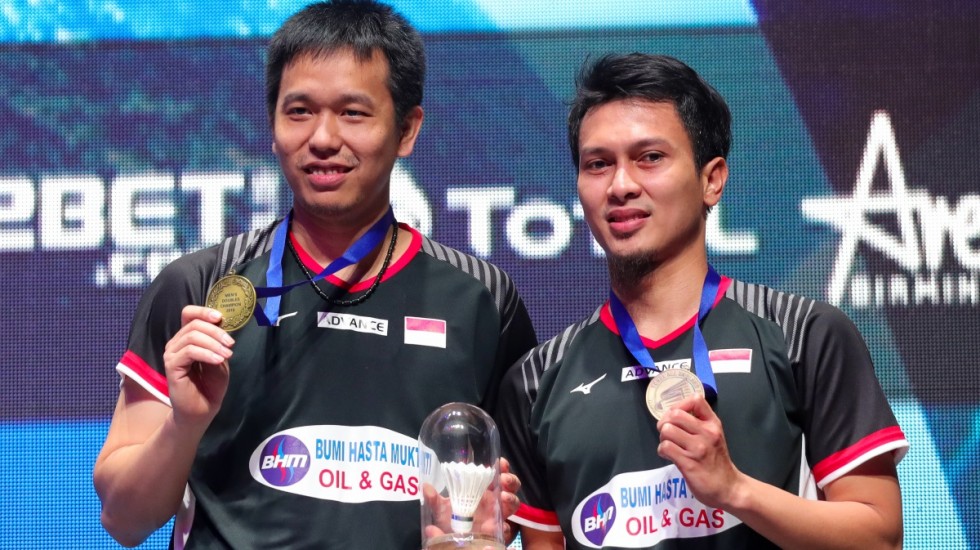 Ahsan and Setiawan: The Second Coming

The ‘Minions’ were favourites to win their hat-trick of titles at the Yonex All England. Instead, it was the ‘Daddies’ who stole the show.

Mohammad Ahsan and Hendra Setiawan – christened ‘Daddies’ by their legions of Indonesian fans – completed a remarkable conquest in their second innings together. If this second iteration is anything to go by, there may yet be more peaks that will be scaled.

The high points of Ahsan and Setiawan’s first innings were world titles in 2013 and 2015, an Asian Games gold in 2014, and a clutch of Superseries titles – including two World Superseries Finals crowns. But, following a loss of form and stints with different partners, the two got back together early last year.

They didn’t quite set the circuit afire, but there was an uptick in their performances compared to 2016. A high point was their Singapore Open win in July 2018, followed later by semifinals in Denmark, China and Hong Kong, and their qualification to the HSBC BWF World Tour Finals.

It was perhaps typical of their understated nature that the spotlight wasn’t on them going into the All England, despite a runner-up finish at the Indonesia Masters. There they had outplayed three of China’s best pairs before running into younger compatriots Gideon and Sukamuljo in the final.

The Minions unexpectedly crashed out in the first round, but Indonesia’s flag was kept flying by Muhammad Rian Ardianto/Fajar Alfian and Ahsan/Setiawan. The ‘Daddies’ enjoyed one smooth win after another – impressively beating third seeds Takeshi Kamura/Keigo Sonoda in straight games in the semifinals – to earn a spot against surprise finalists Aaron Chia/Soh Wooi Yik in the title clash.

Given their experience, the odds favoured the more experienced pair, but Setiawan had picked up a calf injury in the semifinal, and he limped out of the arena, unsure whether he’d be fit for the final.

The injury did appear to hamper him in the early stages of the title bout, and with Chia/Soh on fire, the Indonesians withered under the assault. The opening game was lost and Ahsan and Setiawan had to dig themselves out of a hole.

This they did by tightening up on the style that they are masters of – controlling the serve-return and third shot. Ahsan and Setiawan’s interceptions at the net started to get sharper; cramped for room and forced to lift, the Malaysians struggled to free themselves of the constricting style of their opponents. Quickly the tables turned, and Ahsan and Setiawan had their second All England title.

Setiawan, who has an Olympic gold (with Markis Kido), termed this one of his biggest achievements.

“We’re older now, compared to when we won in 2014. It’s a special feeling to win here as this is the oldest, the most prestigious tournament,” Setiawan said.

Another Indonesian – one who has eight All England titles to his name – the incomparable Rudy Hartono, praised them as role models.

“Hendra and Ahsan are examples, role models for young people, that age is not an obstacle. It is not easy for players over 30 to become champions in prestigious tournaments,” he said at a felicitation back home for the returning champions.

With a big title in the bag early in the season, Ahsan and Setiawan’s forthcoming campaigns will be closely followed. Can the ‘Daddies’ pull off another surprise at the World Championships?