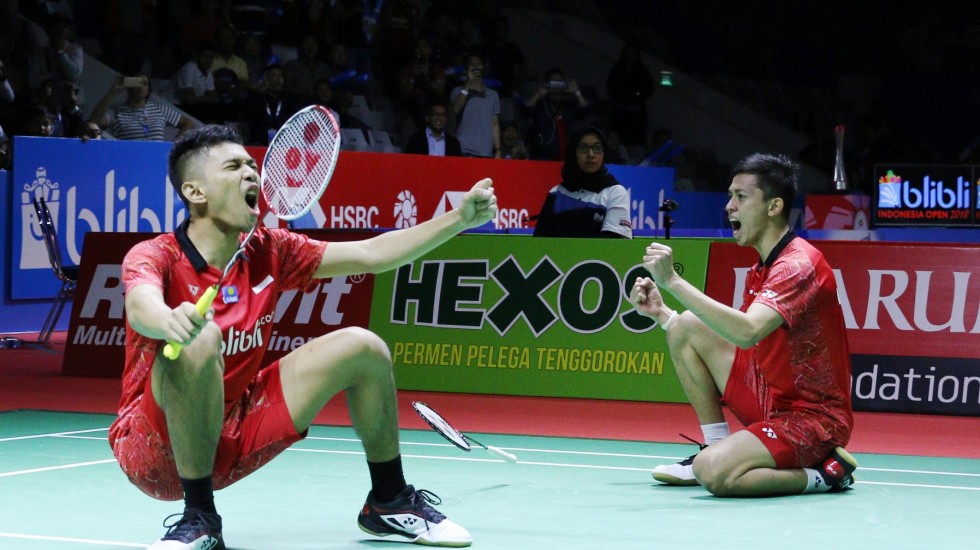 Fajar Alfian and Muhammad Rian Ardianto must have ice in their veins!

Still honing their skills, the young Indonesians withstood an exacting shoot-out tonight versus World champions, Liu Cheng and Zhang Nan, to scrape into the Men’s Doubles semi-final of the BLIBLI Indonesia Open 2018. 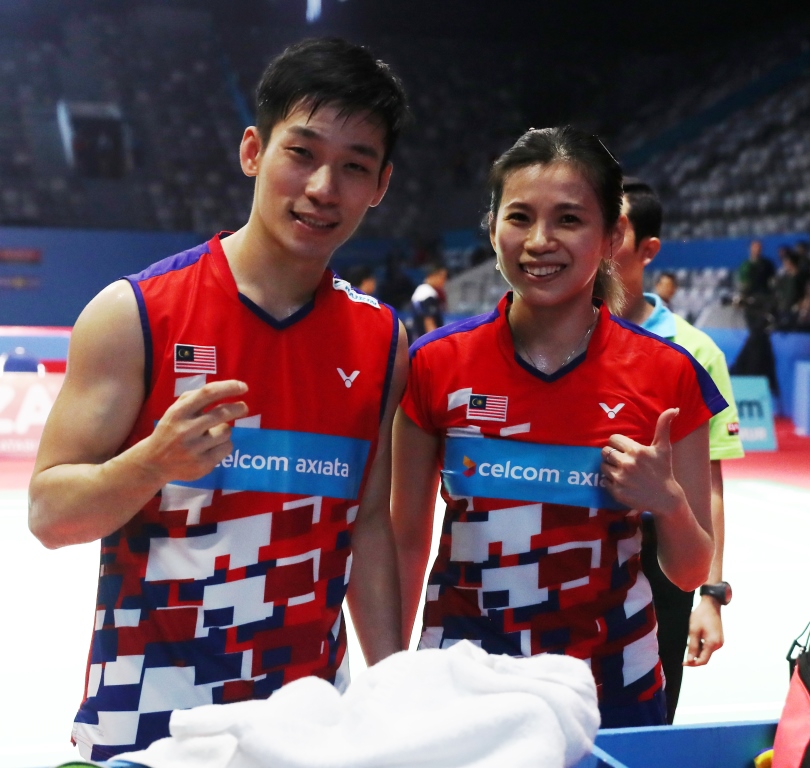 Their hard-fought 21-18 18-21 25-23 triumph inside Istora Senayan ensured the badminton-crazy host nation will have a say in the men’s tandem showdown on Sunday as they will battle team-mates, Marcus Fernaldi Gideon/Kevin Sanjaya Sukamuljo, for a place in the final. The latter had earlier won an equally riveting tug-of-war versus Mads Conrad-Petersen and Mads Pieler Kolding: 20-22 22-20 21-18.

“We are happy to play our juniors in the semi-final but it will be tough. We know they really want to beat us but we don’t want to lose to them either. We will be ready to fight,” declared Natsir, after she and Ahmad dispatched China’s Zhang and Li Yinhui (21-17 21-14).

The other Mixed finalist will be Zheng Siwei/Huang Yaqoing of China or Chan Peng Soon/Goh Liu Ying. The Malaysians closed the quarter-finals, beating China’s No.2 seeds, Wang Yilyu/Huang Dongping (21-19 21-14). Zheng/Huang wore down Yuta Watanabe/Arisa Higashino, 21-13 16-21 21-10, to avenge their loss to the Japanese in the All England final.

However, the night belonged to Alfian and Ardianto (featured image) who produced some heart-stopping heroics over their more experienced rivals, trusting their attack and going for broke in the dying stages. It took five match points but finally they got the job done as the irrepressible Ardianto pushed a backhand deep into the court for the winning shot; a relieved Alfian sprawling on the court triumphantly.

“We are really proud to win in front of our supporters. They motivated us a lot,” said 23-year-old Alfian of the boisterous crowd that accompanied them faithfully through the on-court drama.

“The Chinese were very fast and we were not anticipating well enough but we kept fighting. We look forward to playing Marcus and Kevin tomorrow as they are the world No.1 pair.”

Gideon and Sukamuljo also survived a see-saw duel in which they squandered a game point in the opener and then had to scramble from 6-11 down in the second game which they won on the third attempt to force a decider. Determined not to find themselves in another desperate situation, the top guns were off to a flyer, boasting an 11-4 lead at the changeover. Despite a contentious moment and a late flurry by the Danes, the No.1 seeds prevailed. 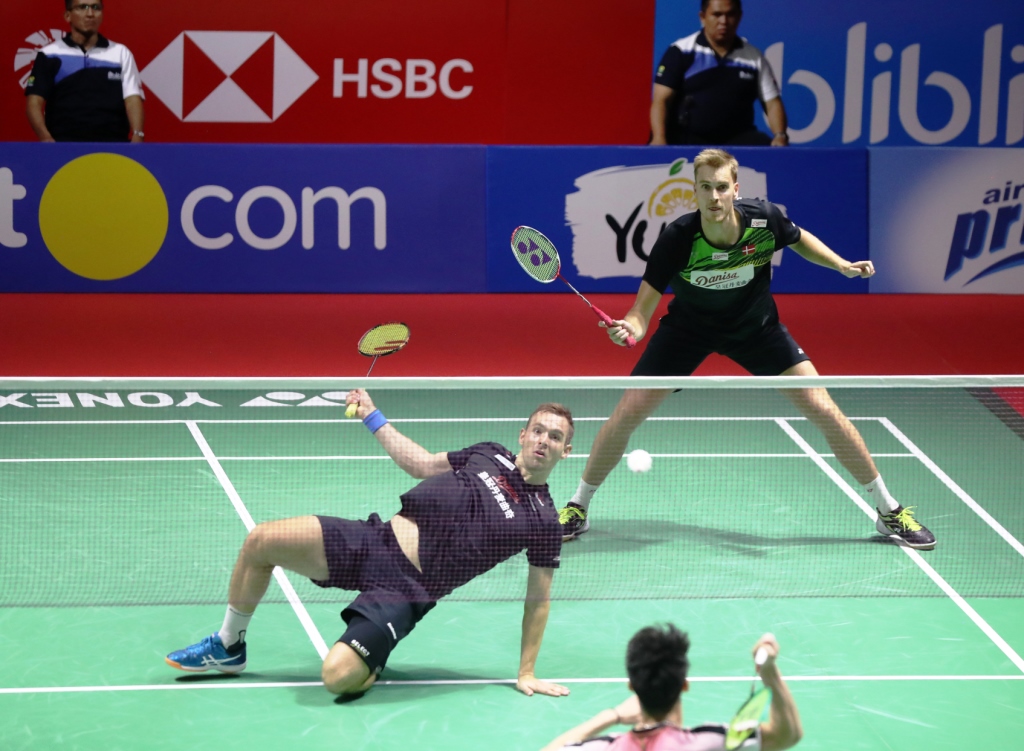 Indonesia’s hopes of also having an interest in Women’s Doubles were thwarted by the brilliant defence of Yuki Fukushima/Sayaka Hirota who saved three game points to defeat Greysia Polii/Apriyani Rahayu, 21-14 22-20, when a decider seemed all but certain. Showing why they reached the top of the world rankings two weeks ago, the No.2 seeds attacked relentlessly to snatch five straight points, after trailing 17-20 in the second game.

“We decided to be aggressive and it paid off,” said the ecstatic pair, quickly becoming household names in badminton. 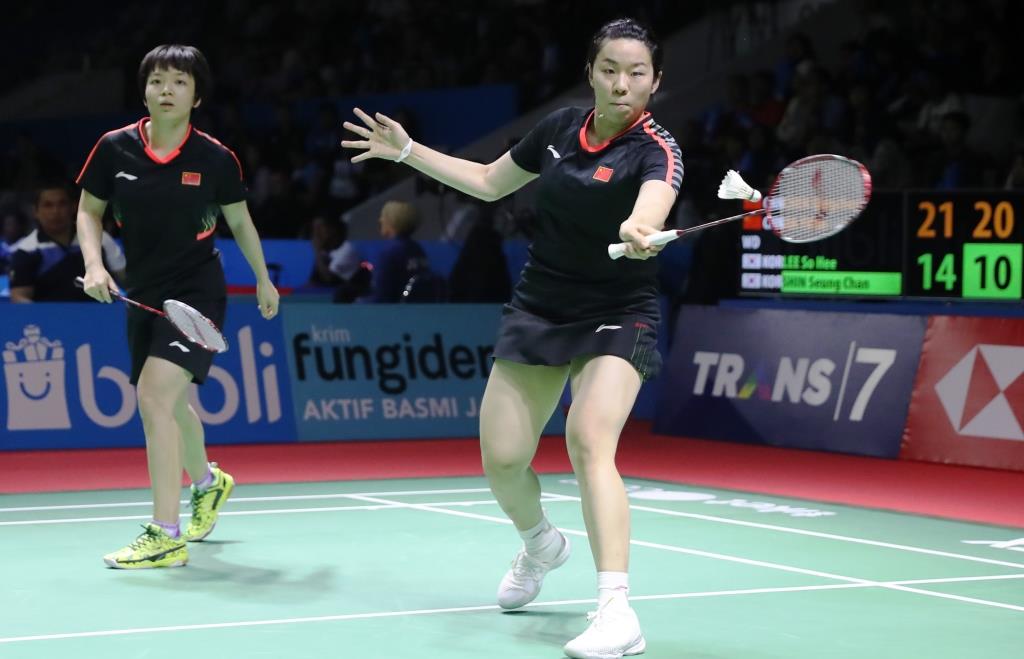 Japan’s recent dominance of Women’s Doubles sees Fukushima/Hirota face their compatriots, Misaki Matsutomo/Ayaka Takahashi, in the semi-finals while the newest Japanese duo to catch the eye – Mayu Matsumoto/Wakana Nagahara – take on reigning champions and top seeds, Chen Qingchen/Jia Yifan, of China. Matsutomo/Takahashi flashed back to their Rio 2016 gold-medal performance, whizzing from 16-19 down in a tense decider versus China’s Huang Dongping/Li Wenmei to prevail 13-21 21-12 21-19.

In the race for solo supremacy, all eight men’s and women’s quarter-finals were won in straight games, conjuring up some massive semi-final bouts – none more so than a much-desired Men’s Singles showdown between the masterful Lee Chong Wei and Japanese sensation, Kento Momota. At age 35, Lee was in near-exhibition mode versus promising Thai player Kantaphon Wangcharoen, coolly raising his level from 9-16 adrift to wrest the match, 21-13 22-20 – thus ensuring an encore of last Sunday’s CELCOM AXIATA Malaysia Open 2018 finale in which Lee won his 12th home championship. 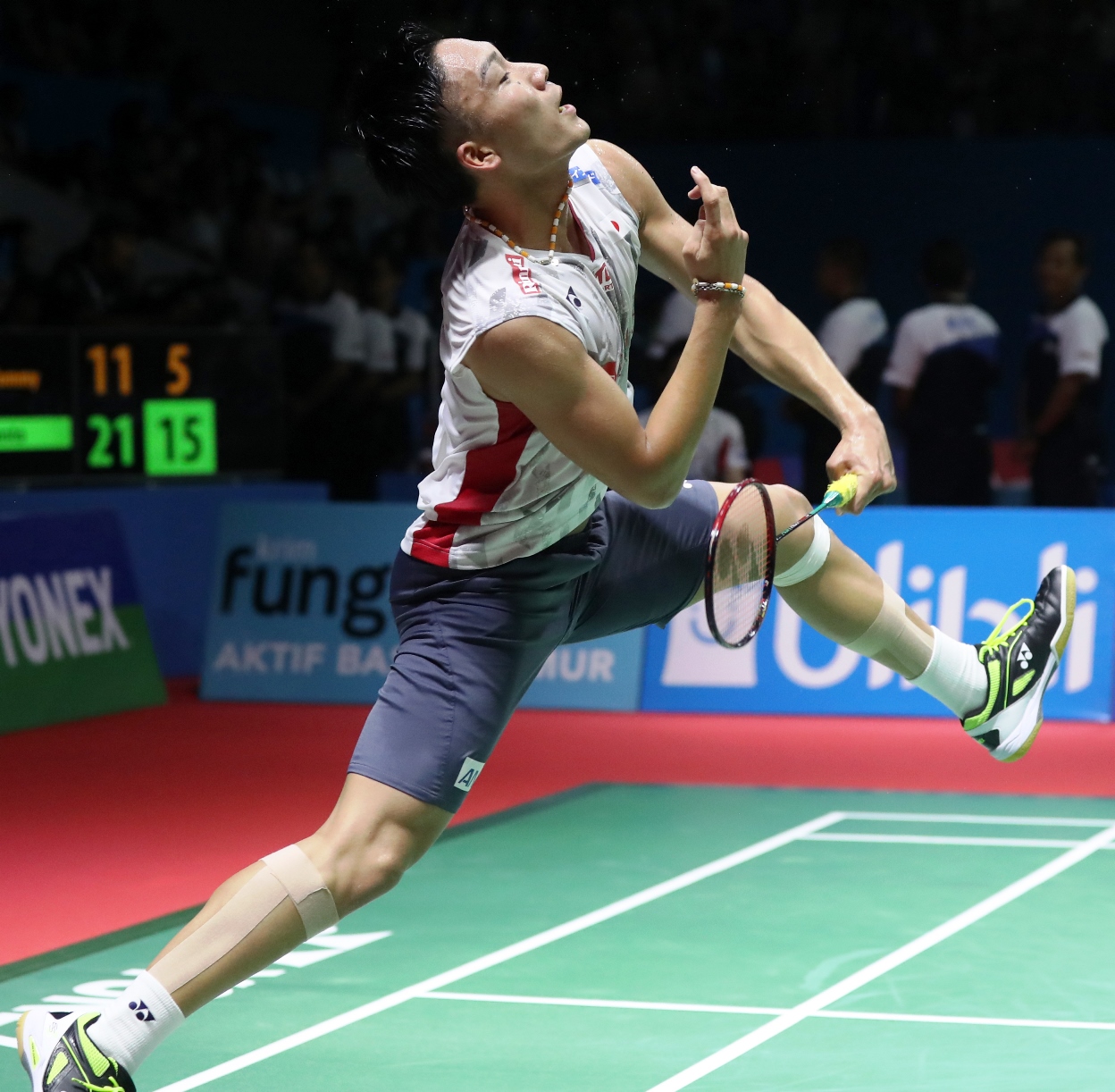 The next semi-final features World champion Viktor Axelsen (Denmark) against Shi Yuqi, who has emerged as China’s top Men’s Singles force, amid waning performances from Chen Long and Lin Dan.

Tai Tzu Ying continued her progress towards a fifth Women’s Singles title this year, brushing aside a spirited challenge from Scotland’s Kirsty Gilmour (21-16 21-11). Her semi-final will also be a repeat of the Malaysia Open final, with China’s He Bingjiao again trying to derail the Chinese Taipei top seed, beaten just once this season.

Last year’s Indonesia Open runner-up Sung Ji Hyun is a step away from at least matching that result. The Korean will be up against Chen Yufei of China who overcame Japan’s No.2 seed, Akane Yamaguchi, 23-21 21-8. 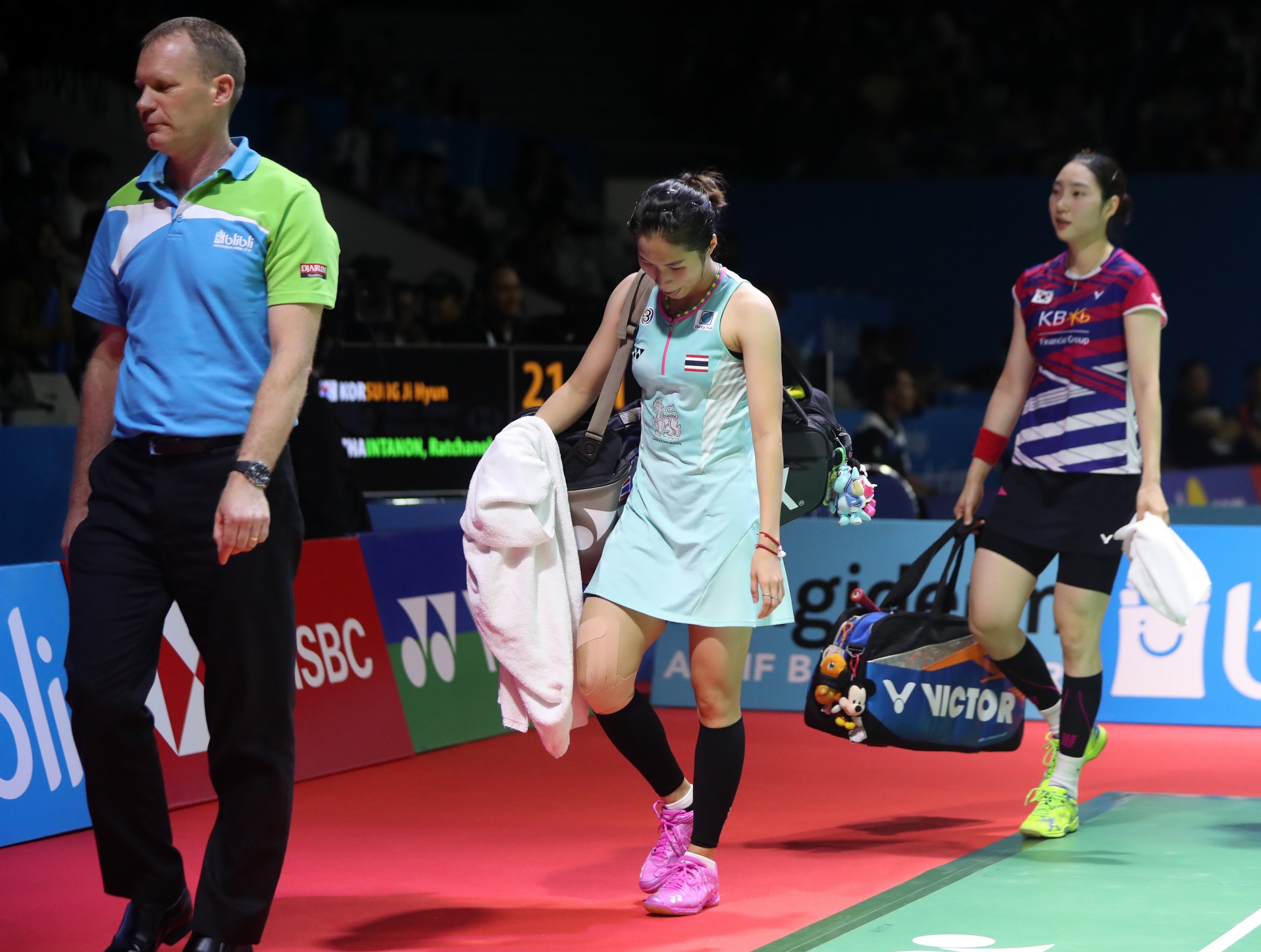